Minus my many colorful phrases and the formation of all-new curse words in response to its difficulty, I liked Towerfall Ascension. I missed out on it when it hit the OUYA1 originally, so the PS4 stood in as the perfect surrogate mother, allowing myself and others another opportunity to play a really great, really challenging game.

Not just an open avenue for boob games and quick, hastily-thrown-together zombie shooters, XBLIG also functions as a ‘surrogate’ of sorts, giving indie developers the chance to capitalize on the absence of a popular title on Xbox by ‘borrowing’ said title’s gameplay, style, etc. A Clone, A Homage, Inspired By, whatever you want to call it, these games can sometimes effectively mimic the original, giving players a look at a game they might otherwise miss, at a tidy, reduced price. Ascension – Climb The Tower ($1.00) is one such instance, providing a stripped-down version of Towerfall.

The setup is immediately familiar in Ascension‘s ‘Horde’ setting, which tasks the player with surviving endless waves of enemies on a large, static screen. You’re given a limited amount of health to start2, a barely-adequate melee weapon, and set loose to scrounge for projectile weapons (think axes, bolts of lightning) and other items in randomly-appearing treasure chests. Everything feels right here, from the easy exits on the top, bottom, and sides of the level, to the almost-brutal way that enemies can gang up on you3, all the way to the ‘damage sponge’ bosses and the helpful ability to pluck your already-thrown weapons off walls and ceilings to reuse them.

Though the initial stage assortment isn’t exactly stellar or too varied, the game does offer you a level editor to design your own. Most might not be thrilled at the prospect, but you may have some incentive to tool around with it; much like Towerfall, the four-player local multiplayer is clearly this game’s strength and the most likely to suck up your free hours (assuming you have local friends, that is). 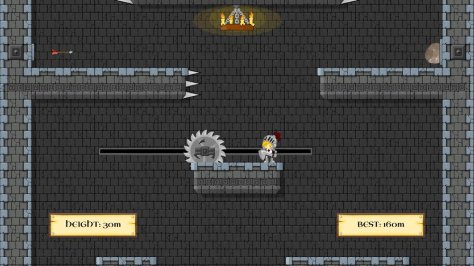 And Ascension plays its role well. The art is sharp and the controls are adequate, with one glaring exception; the avatars in Ascension slide to a stop on any surface, making it harder to line up jumps (or double-jumps off walls, natch) and accurately predict your movements— as well as your enemies’ path. It’s less noticeable in a frantic battle, but especially evident in the game’s aggravating ‘Ascension’ mode, where you continually climb a vertically-scrolling tower filled with blind jumps and other hazards, with only a single hitpoint between you and death. Needless to say, you may have to spend some time (and lives) adjusting to this imprecise motion.

While it’s throwaway, that added mode and the other (better) game variations are a nice disguise to mask the rather light overall content. Ascension – Climb The Tower does feel like Towerfall at certain moments, though, making you forget about its other shortcomings (a bargain price certainly helps). More importantly, it provides an ‘entry level’ introduction to a game that some players might have otherwise passed on. Absolutely play the original if you can, but if that’s not an option, this game makes for a worthy stand-in.