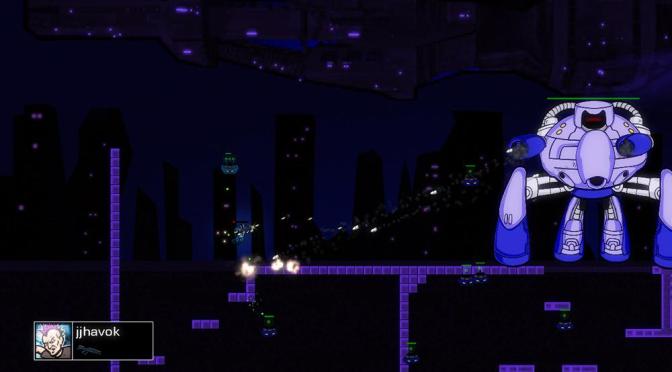 You know, there may be something to this whole ‘Let my five-year-old kid build my game’ concept. Sure, there’s the immediate D’aww! factor of pint-sized game development, but worse things have come from perfectly-capable adult types with millions of dollars. So, kids and indies, why not? I have to admit, it worked out pretty well for X S.E.E.D (also from a five-year-old). Now we come to Stop the XOID! ($1.00), and once again, a kid takes the reins of Designer.

Billed as a sort of ‘proactive Tower Defense’, the game has you (or up to four friends locally or online) defending the planet from an invading army of robots known as XOIDs (pronounced ‘Zoids’, if you’re curious), one blocky arena at a time. Well, it’s only three levels, to be exact, but you get the idea. It’s curiously labeled a ‘beta’, so maybe it’s a miniature invasion to start. Like Delaware, or something.

While the scope of the war may not be epic, the impending battle remains the same. With an albatross-sized robot waiting patiently at the top (it serves as a boss battle, technically) infinite waves of enemy foot soldiers descend on your base below, threatening the ball of energy known as ‘lifeforce’. Destroying those advance parties will earn you dropped cash, which you can then spend at the local armory, conveniently-located just next to this raging conflict.

You’ll have a number of weapons on hand, ranging from guns and upgrades for those guns, to grenades and the very helpful sentry bots that you can place to guard your fort while you make the arduous climb to the top of the level. Taking down the big boss will complete the stage …and that’s about it. No bits of story to move things along or any progress saved. Pick another level (each successive arena ups the challenge) and repeat the difficult hike. 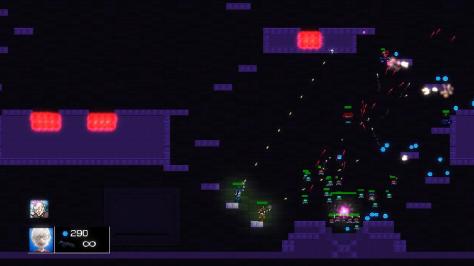 I say ‘arduous’ and ‘difficult’ not because the journey is long or terribly fraught with danger, but because your character is so inept at the platforming. Even jumping gives him trouble, and he slides to a stop like the ground is made of ice, causing further frustration on tinier ledges. Battles often went on longer than they had to simply because I couldn’t will my generic space marine to the top. So while you can complete the levels solo, the busy work and anti-climatic nature of finishing it just isn’t worth the hassle.

That’s not to say it wouldn’t be entertaining in a group co-op setting (assuming you can find online matches; I couldn’t). Having others to divert enemy fire and / or make the climb in your stead makes it a much more manageable war. Stop the XOID! doesn’t offer a long-lasting campaign or a great deal of variety, but it plays like an adequate time-waster… so long as you have friends to roll with.