Boxing has never caught on with me. Don’t get it wrong, I love wanton and gratuitous violence as much as the next man (I am American, after all), but I can’t stand to watch it as a sport or entertainment (the Rocky movies, maybe, for my Stallone impression, but Hugh Jackman didn’t help matters). And with Steel Champions (80 MSP) positioning itself as an extremely-lite (and formerly Windows Phone) version of robotic fisticuffs, I knew it was destined for trouble. 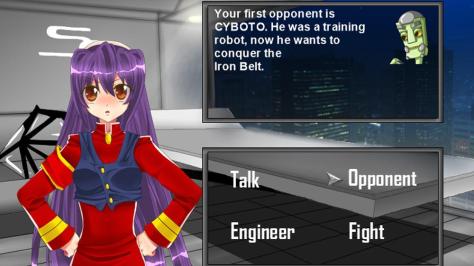 The screenshots here may not be representative, but Steel Champions is essentially Punch Out!! with robots. Regrettably, any favorable comparison ends with that statement. Before each fight, you can bone up on your next opponent, recycle through the same canned phrases uttered by your engineer and manager (I’m a robot named MAX, I seem more human than machine, play our free Windows Phone RPG, yada yada yada), or do a quick training regimen on the punching bag (preferred). Matching the punch commands will enable you to start off the next fight with a full (or near-full) special meter.

Once you’re in the ring, your moveset is basic; the ability to block or dodge incoming attacks, a pair of high and regular punches (left and right, natch), and a meter which fills up during the fight by landing hits, allowing you to throw the aforementioned ‘super punch’, if you will, that does more damage than a standard hit. Outside of that minimal ‘strategy’, most will probably spam attacks and / or blocks until victory, which should come early and often (my only loss occurred while I bought the game, after the demo expired mid-match). 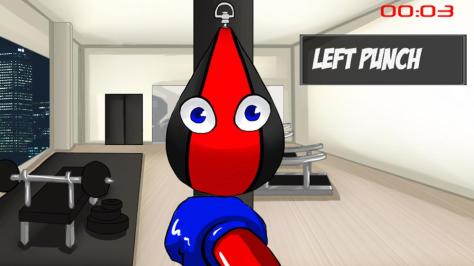 Sadly, your punching bag has more dialogue (and personality) than any of the fighters you’ll face.

For a game that idolizes Punch-Out!!, or at the very least seems aware of it, it doesn’t think to bring any of that game’s unique moves or personality over to its own. It’s simply a series of lifeless fights (totaling 14, if you last that long), some of them reheated rematches, spread across three championship leagues.

What you’re left with is a ‘game’ stripped of almost all interactivity, a button-masher that can be bested in under 45 minutes, meeting very little in the way of resistance and nothing resembling a story or a resolution once the punching is done. Ergo, your toughest opponent in Steel Champions isn’t some robotic uber-fighter; it’s boredom. And that, kids, is fighting a losing battle every time.