These days, the only thing more omnipresent than a zombie wave shooter is the space-based wave shooter. Considering how many zombie games are on the indie channel, that’s really saying something about its omnipresent-ness. Neither subgenre smacks of originality or elicits much joy. You have to offer something unique if you want to stand out. Throwing its uninspired hat into the interstellar ring, Space Hordes (80 MSP) looks to make a dent by offering up… a typical space-based wave shooter. Hmm. So much for pep talks. 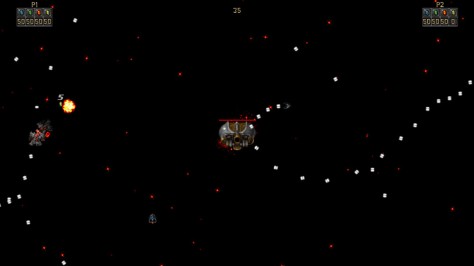 Squint all you want. Your ship’s still small.

Really it’s not all that dire. The twin-stick component works well enough, and the art is evocative of the retro style it claims to mimic. That’s clever marketing-speak used to hide the fact that all of the assets and (eventual) projectiles are tiny, which will make spotting threats harder once chaos settles in. Given that you’re tasked with defending your home base from said threats, and that your very life depends on its survival, the miniature art can be a mixed blessing.

Space Hordes’ only thrown bone comes with its ammo / build system, a very basic tower defense setup that allows you to use funds collected from defeated enemies in order to place defenses (turrets, mines, barriers) around your base as desired. Ammo is selected with the face buttons and comes in various, effective uses such as ‘freeze’ or ‘corrosive’ shots. And once the boss rounds or enemy surges hit, judicious use of both mechanics will be necessary to succeed.

Up to four players can take on enemy squadrons at once, and ideally, the game is designed for that dream of a fully-loaded local multiplayer lobby. With a single man, spending money laying down fire and barriers as quickly as the cash comes in, the challenge clearly outweighs what any one person can manage. Translation: Without backup, you’re sunk. No lone wolf tactics here.

Minus the blandness of another shooter set in non-descript space, there’s really no reason (or hope) in visiting this part of the galaxy if you don’t have one or two friends in tow. Even with those friends, there isn’t anything being done here that you haven’t seen elsewhere many, many, many times over. Pass.