Hey Microsoft, you paying attention? Here’s a really good reason to come around and start courting more indie developers for the Xbox One. It’s called One Finger Death Punch ($2.99), and it’s better than any Orwellian camera device ever cooked up. Coming from a developer you might not expect (despite winning awards), Silver Dollar Games has crafted one of the finest examples yet on why indie development is not only key to any future console’s success, but required.

Even watching the game is fun.

The idea is remarkably simple; a lone stick-figure ninja against a mob of angry stickmen, offering the highly-cinematic thrill of beating the blank faces off of all comers. The game comes with as much content and polish as an arcade title, streamlined controls (there is no movement, X and B do everything) that your grandmother could adapt to, and undeniably fun, infectious core gameplay that cannot be equaled.

Oh, and trust me, that simplicity— it’s deceptive. Enemies start off easy enough (plenty of fodder to go around), but soon you’re facing off against stronger opponents that can take a punch, require delicate timing, and multiple, specific button presses… in careful order. Button-mashing will get you nowhere, as misses leave you vulnerable to attacks and ruin your chances at perfection / stage medals. As the game takes pains to state— you’d rather wait on a enemy to get closer than miss completely.

Fortunately, One Finger Death Punch has been lovely built from the ground up to make you feel completely in control. Forget overwhelming odds (200 vs. 1 in a blinding thunderstorm? Piece of cake.), multi-hit / patterned enemies, and all the chaos happening on the screen— you are ‘the one’, fighting a hundreds-strong Mr. Smith army, over and over with multiple weapons and collectible skill combinations. No heavy-handed storytelling by the Wachowskis getting in the way here, just you kicking ass in serious style. 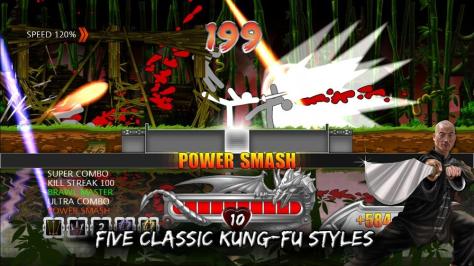 Using an overworld map as a hub, you can take multiple paths, and play through a dozen-plus stage types and survival modes (including a No Luca No Survival). Whether it’s a timed fight, a one-hit defender round, boss battle, or a lightsaber duel, the game doesn’t tire or get boring. Every stage (of 250, mind you) is an epic, choreographed battle, with a sometimes razor-thin line between success and failure. Not that you’ll mind the challenge. With plenty of unique runs and special attacks to fill the level with smashed debris and the blood of your enemies (without a hint of slowdown), virtually no loading / instant restarts, the pace never slackens, or takes pity on you.

Never have I had as much fun with an XBLIG, or felt like a fictional ninja badass, as I have with One Finger Death Punch. The game is an instant classic. There’s not a mark to be said against it. It excels in every possible way, challenging the best of us while still remaining pick-up-and-play enough that literally anyone could start in on it, and subsequently get hopelessly addicted. Stop reading this and buy it immediately.

Without stopping to let the recent semifinalist shock of some odd choices and even odder omissions sit, the Dream.Build.Play people have gone and announced the winners of this year’s competition. If you haven’t yet heard, go ahead and take a seat for this one.

I’ve been saying it for years… well, the last year, that despite all the negative press (with some admittedly coming from me) and bad tastes left over, you should not sleep on Silver Dollar Games. That for every pile of Who’s the Daddy, poor man’s FMV quiz show crapware they put out, they were building up to something better. They did well with The Jump Hero, made it interesting with stuff like Sins of the Flesh, and now, just watch the above trailer for grand prize winner One Finger Death Punch and try not to get excited for the game. I’ll wait. … … … You’re excited, aren’t you? Yeah, me too.

Congrats to the Silver Dollar team, of course, and best of luck in finishing up the game. Last I heard, it was still a few months off from completion. With their newly-gained $40K and a possible XBLA contract, though, I wonder if the release of the game will take a different form than its current, XBLIG-plotted destination.

On the Windows Phone side, it was nice to see current XBLIG (and Leaderboard member) Pixel Blocked! come away with the first runner up prize. Well done, sir.

It goes without saying, but a huge congratulations to all the winners in the 2012 competition, and again to all that participated. You’re now considered at the top of your class. For the already-released games, I can vouch for their fun and impressive content, and for the rest still to come, I look forward to that future enjoyment.