It goes without saying that Game Development is a tricky profession to be in, especially for first timers. Granted, there are wild successes, but too many instead miss the mark. More often than not, the cause is they basically try to be and do too much, and the end result often suffers because of it. Such was the case of Ivatrixgames and its first release, the short and generic RPG, Mortal Legacies. With the studio’s second title, Arcade of Neon, complicated game systems and programming are stripped away, as is the art, really, leaving behind a game that’s quintessentially arcade (it’s in the title, ain’t it?).

As if the bare blackness of its background weren’t enough of an indicator, it’s clear that Arcade of Neon doesn’t operate with any superfluous pieces on the board. This hurts the bottom line, of course, dulling the visual attractiveness of the game to the point of absurdity. I mean, come on, it’s all circles. Taken with the type of gameplay represented, however, it makes sense and turns out to be less severe than it could have been.

The game, and it miscellany of modes, is basically about color matching and twitch controls, steering into or away from trouble (depending on the mode), or switching your color with the face buttons to capture similarly-scribbled circles (again, dependent on game type). Instructions are given, but the gist is this: sometimes you’ll alter the colors on your own, sometimes you’ll need to earn a color change, and sometimes the decision will be made for you. Naturally, the speed of the game and the frequency of certain colors will change as you go along. The goal in each setting, though, is strictly black-and-white— get a high score.

In doing so, you’ll complete items from a checklist of ‘challenges’, which in turn opens up new minigames that alter the way it plays or try for something a bit… different, including a color-swapping, incredibly boring version of Pong that’s impossible to win or lose unless you do so deliberately. Some of the modes’ objectives can bleed into each other, making one game seem indistinguishable from the other, though each is fun in its own way (likely in five to ten minute blocks of amusement).

After you’ve unlocked all the modes, however, you’re really left with nothing to play towards. Online, P2P score-keeping would help greatly in that respect, but even the lack of a true offline leaderboard (just one catch-all solution for every mode) negates some of its staying power. It may seem minor in the grand scheme of things, but when you’ve focused on high scores as your main draw, the absence of accompanying leaderboards is more glaring.

Arcade of Neon is undeniably a more comfortable and confident title than Mortal Legacies, one that’s suited to the developer’s talents and offers a more engaging experience overall. That said, its bare assets and similar modes / styles do little to set it apart from other arcade releases that follow the same format. Worth a look to see what sticks for you, but don’t expect much of anything new or lasting.

Monster King (80 MSP) marks the second JRPG I’m playing in as many weeks, Mortal Legacies (review) being the other. In a quick vote between the two titles, Monster King is the superior, though when taken against the whole of the indie RPG catalog, it falls somewhat short.

As the eponymous hero, you’re told that monsters have besieged the lands of… somewhere. It’s never elaborated upon. You don’t get a proper name or any speaking lines. You’re just told to fight. It doesn’t matter if you’re personable, as you’re not accepting sidekick applications. The whole setup is bare-bones. In every way, you’re lone wolfing it in MK.

Combat is of course turned-based, via the typical menu selections; Attack & Magic, use a potion, flee a battle. In a nice gesture, you automatically equip the best weapon and armor for the job, and shops in the various towns will only sell to you if its beneficial for you (a completely foreign concept in our reality). Exploration is minimal. Outside of potions or new weapons / armor found in scattered chests, there’s not much to see. Mostly you fight random battles in the field, covering ground until you reach a bridge or bottleneck, at which point you’ll take on a boss for the right to pass, then repeat. So long as you’re well-leveled, battles are fast, if uneventful, though there is an interesting wrinkle.

As in Meat Loaf?

MK subscribes to the theory that ‘Hokey religions and ancient weapons are no match for a good monster at your side’, enabling you to first weaken and then add the game’s monsters to your armament, Persona / Pokemon style. The idea works well in practice too, adding a degree of experimentation to fights despite the expected ‘try fire vs. ice, etc.’ checkmates. Given the high cost of some magic, it’s an effective option once you’ve learned each monster’s weakness. And though you’re not rewarded with anything for doing so, there is a strange sense of accomplishment once you’ve captured the lot of them.

And that roster of creatures is diverse, if nothing else. Psychic rats. Brains in jars. There’s a Tree Killer (doesn’t kill trees, oddly) that is timber with an uzi, and a Not Ready, which looks like a pixel Quagmire (maybe it’s the prominent jawline). That’s worth a chuckle, though some of them are duds (Snowman, blah. Hover Dude, really?).

In terms of excitement there isn’t much, a few hours of old-school monster-slaying, but I found it charming. Grinding out progression, one character level and one stat increase at a time, evoked Dragon Quest for me (the first monster, Sludge, is an easy stand-in for a Slime). Nostalgia is a factor, sure, and it’s an innocuous RPG without much of a story (till the very end), but it moves swiftly and doesn’t overstay its welcome.

Despite the allure of the bigger-budgeted, Hollywood-visuals RPGs, there’s plenty of market space left for independent role-players to set up pixelized shop. The Breath of Death / Cthulhu one-two, EvilQuest, and the upcoming Penny Arcade 3 are all good examples of indie development gone right. And while they can’t ever hope to match the look and scope of a retail release, I’m here to say they can beat the big guys at their own game, with quirky, original stories and / or characters that strike some chord with the player. It’s all about ideas.

Mortal Legacies‘ (80 MSP) box art (looks a bit like Desmond from Assassin’s Creed, doesn’t it?) seems to tease a darker, more modern take on old school turn-based JRPGs, though the truth is much duller. Assuming the role of blue-haired Valloc, you’re given a fateful directive (from your Mom, of all people), to explore the land of Elisia in search of the King’s lost crown and prevent the shadow from engulfing the world. Not that the world much pleads its case for salvation. It’s as bland as they come, and nobody has much to say to about it. From townspeople to party members, a sentence’s worth of exposition about does it. All the castle’s guards communicate via the Skyrim meme, which has seen enough use but to me never gets old.

What does get old is the combat. I realize the turn-based system is inherent to retro role-players, but here the random battles tend to come back to back a little too frequently, and you’ll constantly buff and restock those allies in your group with spells / attacks that hit multiple enemies, just to get the damn battle over with rather than necessity. 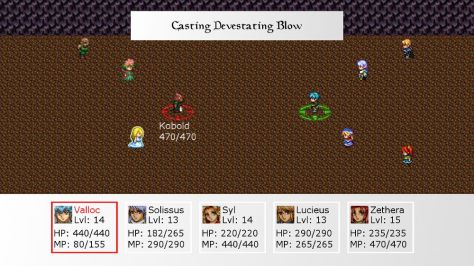 The game is too linear and too short to set up a decent plot or characters, with party members that fill every RPG support role stereotype (mage, rogue, priest), and have zero personality, backstory, or reason to be there. Same too for the quests and objectives. It’s all stuff you’ve seen / done previously (pirates, bandits, oh my).

You also level up at an incredible clip; on medium difficulty, it’s nearly every other fight. I’m sure good intentions were there (making it easier to pick up and play, and thus, more enjoyable), but the lack of proper balance favors the player in almost every battle, leaving the endgame devoid of any challenge or joy. The game’s brevity (hour+) is therefore a blessing. Beating the game unlocks a new mode that turns Valloc into a demon (no explanation given, and the narrative doesn’t change). With the weapon and armor you’re able to then equip, you’re over-powered from the start, which just highlights the game’s balance problems even more.

There’s no need to go on. With the absolute barest of character-building and story-telling frameworks in place, a cumbersome inventory, and frequent, protracted fights, it’s no surprise that Mortal Legacies is a completely skippable experience.