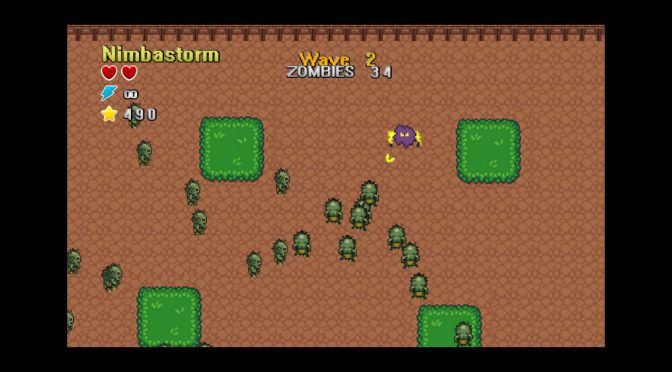 Speaking of nerd cards in need of being revoked, I’ve avoided developer RicolaVG‘s Indiemon series on XBLIG for various reasons, tops among them being that I’m not a huge fan of Pokémon… …I know, it’s heresy, right!? Semi-adorable creatures battling other semi-adorable creatures, with you collecting them1 like a packrat and sending them to endless war; what’s not to love? But… throw some ‘undead’ into the mixture… label it Indiemon VS Zombies ($1.00)… and now you’re speaking my dead / slightly-decaying language, friend!

That ‘language’ I speak of takes the form of that ‘old reliable’ videogame fallback, the twin-stick shooter genre. The game features twelve Indiemon slaying mobs of zombies, each with their own unique attacks and special moves. And just as reliable (i.e. predictable), those zombies are fought in a pair of rather bland arenas, in a wave-based format according to difficulty. In other words, it’s like every twin-stick zombie shooter you’ve ever played.

Well, somewhat. Indiemon VS Zombies attempts to mitigate some of its me-tooism via upgradeable skill trees, giving each indiemon access to his or her— or its— secondary attacks, in exchange for XP earned during each wave, natch. Some of these ancillary weapons are better suited to the game than others (like say, a gun that can shoot through multiple rows of zombies at once), but they do inject some much needed variety. You can also tweak movement speed and XP gains, or buy additional lives and ammo, which again, helps to give the proceedings a little more depth than just ‘shoot ALL the things’.

It still boils down to just that in the end, of course, and it’s a familiar fight. Even the A.I. phones it in. Being surrounded is never good, but you can always just strafe around the edges of the map and do just fine, or have a friend tag along as a second character and gun (there’s local co-op, if you insist). Though short of unlocking some additional indiemon for good play (outlast all waves on a particular map, collect a certain amount of extra lives in reserve, etc.), there’s not much else to it beyond the first hour.

And that makes Indiemon VS Zombies just so-so. Fans of the Indiemon series will undoubtedly be happy with the game, while twin-stick enthusiasts can probably find a favorite character to run through it with. Granted, it’s a fairly generic shooter underneath the Pokémon-ish paint job, but come on… Semi-adorable creatures battling hordes of the ravenous undead; what’s not to love? Eh, you’ll have to answer that one for yourself.