Unless you inherit a well-known name or fortune, everybody has to start somewhere. ‘That’s the nature of the beast’, ‘Rome wasn’t built in a day’, whatever saying you live by. And very rarely does that start, regardless of the field, make a splash or give you instant recognition. For every success story, a hundred failures go unmentioned, or a get a single sentence on a page in some forgotten corner of the internet. A lot of those ‘failures’ are not so for a lack of vision or without having the best intentions, but simply because it is a start. Imaginary (80 MSP) is that sort of game, auspicious in some ways, regrettable and boring in other respects.

A platformer first, collector second, the jumping here lacks gravity, as each press of the button sends you flying. The game is in base form, graphics-wise, and sets you up against some similarly strange-looking bad guys (see trailer). Getting hit adds seconds to your counter (which, like Human Subject before this, has no effect on the game and is more personal goal than penalty) and ‘wounds’ you. You start to fade with each hit. Take too much damage without regenerating or going into hiding, and you die.

Imaginary does take a different approach to the combat, giving you zero physical attacks and leaving you to artfully avoid enemies by ‘disappearing’ into the background via your chameleon trick, the game’s title. That’s not to say you’re a total pacifist. Instead, various weapon activators (cannons, electrical conduits, etc.) can be used within the level, activated with your ‘life essence’ (the yellow shots you can fire), which is both a welcome wrinkle and a hindrance. Fire off too many rounds, and you’ll die as quickly as you would against an enemy.

Though the biggest issue with the inability to wield a weapon stems from those ‘shots’ that power the alternative attacks and equipment. You can aim in a general direction, but it’s more or less a crapshoot where that shot will go. Fighting enemies or the boss characters is therefore needlessly frustrating, trying to both jump and fire at once (it also doesn’t help that the cannons are angled in such a way that you sometimes can’t tell where even those shots will end up). In later levels, shooting timed (and often short on the clock, naturally) switches in order to reach the next area can be double the work for that same reason. 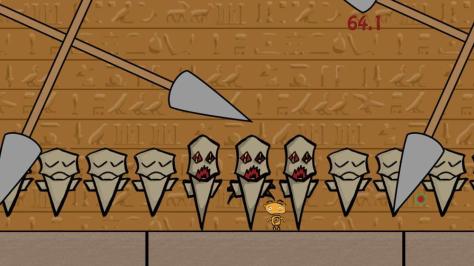 These guys get straight to the point.

Progression too, is more trouble and backtracking than is reasonable. The goal in any given stage (minus the ‘Challenges’ mode, which is just about reaching the end) is to collect four keys. For the first half of the levels (of a total of 20), their size ranges from small to medium. You’re occasionally unsure of where you’ve gone due to the same-ish design and art, but it’s not too far of a walk to right yourself. Though as the levels increase in size and complexity, and you’re given more options for traversal, requiring multiple switches and elevators just to see it all, it’s way too easy to lose track and miss a key or expected route.

Imaginary‘s ideas are coming from the right place, but they’re not quite there yet. The simplified art and sound effects, the frustrating shots, the blind progression and floaty jumps, they’re just above tolerable. It is, as I opened with, a start, and though Randomly Generated Games may or may not have a future with Imaginary, it has to first know the sour if it’s ever going to appreciate the sweet.