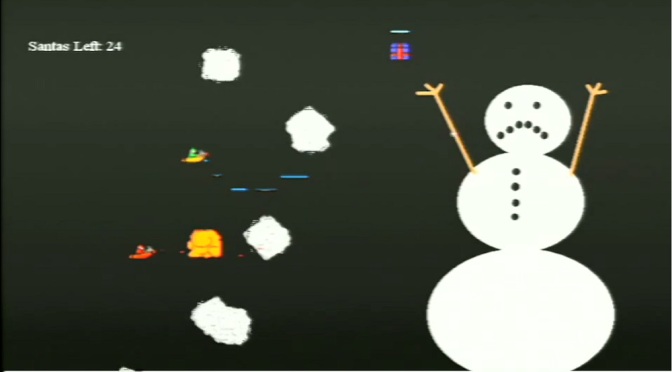 Depending on when you’re reading this article… Happy Holidays! What? It’s not? Oh, I mean… er… well, you know. I’ve got a very narrow window of opportunity for this thing. Carry on, then. September is probably a little early for spending sprees and gift-giving (just don’t tell that to this consumerist economy of ours), but that hasn’t stopped Santa Slay1 ($1.00) from getting its holly-jolly party started before the credits have even started to roll on Summer.

A side-scrolling shooter with South Park-ian2 visuals, Santa Slay has old St. Nick returning home from a test run of his experimental sleigh to find his entire workforce of elves and reindeer slaughtered, the apparent work of (maybe) terrorists hell-bent on the annihilation of the holiday spirit. That storyline, as ludicrous as it is, is humorous enough3 to carry the otherwise pedestrian shooting, with Santa and his chief elf taking on hordes of enemies from every walk of life, from aliens to bloated helicopters, and a giant snowman.

Fictional holiday figures fighting each other to the death aside, it’s the typical shooter setup— one hit equals death, kill everything that moves, a boss at the end of each level. Some strategy will be necessary. You can’t strictly hold the trigger down to ‘spray & pray’ throughout, as doing so overheats your guns, but you get the idea. Powerups come in the form of packaged presents, and include the usual staples of shields, advanced weaponry, and extra lives.

Boss fights are a highlight, and can be tough. And no, I have no idea what this thing is supposed to be.

Despite the simplistic hook, Santa Slay does hide a fairly significant challenge. Your pool of extra lives is shallow, and a lone sleigh drifting among a sea of very tiny bullets means you won’t see everything coming. There’s no continue system or saved game option either, though most shooter fans shouldn’t have too much trouble in completing the game’s half a dozen stages, including a multi-part finale against another holiday mascot, pissed that his holiday is relegated to being a ‘crappier version of Halloween’.

Humor may or may not be enough for you, and Santa Slay offers nothing you haven’t seen before. It’s rather short4, rather basic, isn’t going to make anyone’s ‘Best-Dressed’ list, yet it is strangely amusing. I realize that’s hardly a solid vote of confidence, but this is a Christmas-themed game released in August; I’m doing the best I can with the material. So… Happy Holidays! No? Still no? Ah well, one of these days it’ll be applicable.

EDIT 9.7: A recent update to the game now gives you the option to increase the amount of extra lives to 20 or 30. One could argue this would make the game too easy (and it does), but hey, at least we all get to see the ending now.