Of Aztecgames’ prolific (and not exactly terrific; Tic-Tac-Toe? Rumble Voice? Really?) releases on the channel, Squeebels (80 MSP) is probably their most interesting project to date. Recalling the early days of the ‘life-creating and then babysitting’ genre (think of those adorable little Tamagotchi), and just as simplistic, the game puts you in charge of various tiny, multi-colored Squeebels, or as I (unfortunately) took to calling them, ‘hairy balls’. Told you it was unfortunate…

…but it’s also rather representative. What they lack in personality (a few sounds or a brief blink marks the extent of their individualism), they try to make up for with a handful of hair styles. Yeah, it doesn’t do much. Awkward looks aside, the goal of the game remains consistent; raise your pets, feed your farm, and continue the cycle of life via mating. And don’t worry about the particulars; incest is a-ok here.

Food is the most important aspect, central to your squeebel’s happiness and well-being. Keeping plenty of it on hand and / or growing (planted seeds will soon sprout new sources of squeebel-feed, no watering required) is tantamount to life, unsurprisingly. The shop that’s present in every farm stocks a few varieties of seeds, and dropping them into the field from your inventory effectively sustains your farm.

Sadly, the whole idea is just way too simple to encourage prolonged playtime. The different seeds don’t list the pros and cons of each type. They’re separated only by price, with no noticeable effect on your pets whether you harvest the most expensive crop or the cheapest. The only other tangible goods on the market, fencing, is more or less useless as well, since boxing in your squeebels or letting them roam free is only a matter of choice, not dictated by design or necessity. 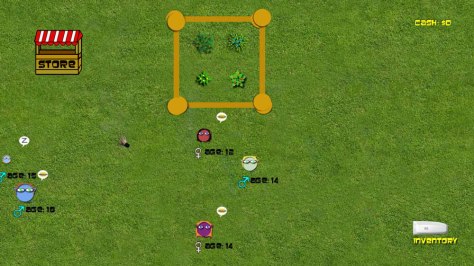 Nor do the squeebels themselves have much lasting draw. Besides the visual markings, there’s no real discernible difference from one squeebel to the next, regardless of which generation or ‘family’ they belong to. Animation consists of blinking eyes, so all the talk of dominant and recessive genes doesn’t much factor in. ‘Interaction’ is simplistic as well, with you either picking them up or ‘petting’ them, neither of which is required. You can sell them too, but again, to what end?

There’s some (very) light fun to be had in watching your farm grow in size, though that it does so really without much input from you just highlights the autopilot nature of Squeebels. Keep plants in the ground, and you’ve pretty much done all you need to do (or can). Easy enough. Congratulations, you’re a fantastic parent! You want a challenge in raising something that involves actual work and meaningful payoff? Buy a kitten or a puppy. Pass on Squeebels.