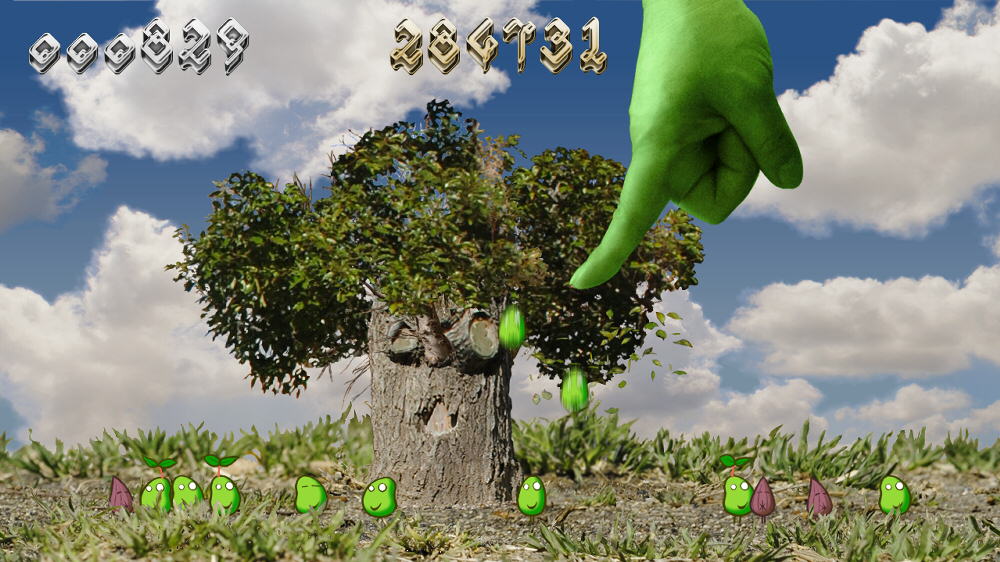 It’s not easy to quantify something like —> <> ($1.00). Not just because it uses hieroglyphics for a title, which is like reviewing the game formerly known as Prince. That it’s Japanese may account for the clash in cultural ideas, though there’s plenty of overseas games that seem eccentric at first glance, but offer a kind of fun ‘different’ that Western developers can’t.  In the case of —> <>, at best, I can say it combines the daftness of Goolin with the growth / assemblage aspect of Pikmin, with only confusing pictograms to use as guidance. 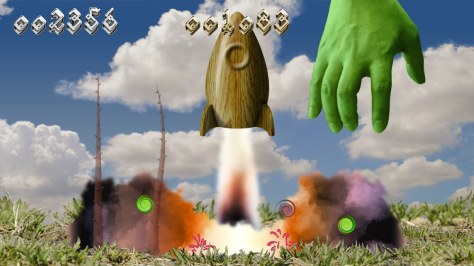 Not that there’s some great mystery at work in the game, as you (you… the big green God hand) are essentially conscripted to squish grapes, grow trees, then jerk them off to create an escape vehicle for the surviving grapes. You might think I’m funning with you here, though I assure you, —> <> is a one-of-a-kind experience that absolutely advocates you tweaking nature’s… ahem, trunk, for good cause. I guess that makes this kind of like Pikmin for Perverts, as I certainly don’t recall you having to masturbate trees until they turned into spaceships in Captain Olimar’s escape from marooned plight.

Yet, such is the role you play in —> <>, and when the fruits of your labor finally board the ship and take off for parts unknown, you’re assigned a high score (more grapes / ships that escape equals more points), and repeat. Nothing left to discover, no new mechanics get introduced, and no happy ending (save for the trees you’ve touched; sorry, too easy).

There’s a few things to experiment with, like flicking branches to release more grapes, or using the mutated red beans that (supposedly) work as added rocket fuel, though that’s being generous to a game like this, which I can’t see anyone without a morbid curiosity sticking with for longer than the trial. Without more detailed instructions or exposition, it’s entirely on you to ascribe any worth. 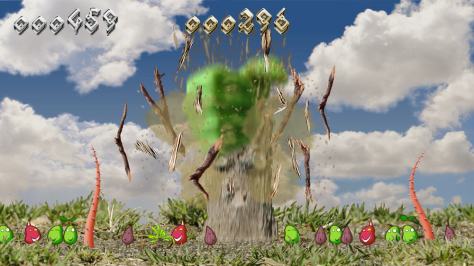 So while it’s true that this game sells that kind of quirky concept that initially draws you in, it inevitably misfires once the novelty and weirdness of it is stripped away.  —> <>‘s bizarre antics have ruined digital gardening for me, so if you find yourself pining for a bit of the outside world, take a hike in an actual forest. Just do us all a favor and don’t touch the trees, eh.

Maybe it’s an annual thing, maybe it’s a reverse form of one-upmanship, the race to be terrible, the game that resets the year’s advances to its lowest point— a title that becomes an indie catchphrase for the worst fate you can think of. 2011 had Goolin, 2012 was all TrickyTreat, and now 2013 currently has Uproar! (240 MSP). Nothing beats TrickyTreat, but let me spare you the suspense; Uproar! is worse than Goolin. At least Goolin had bizarre on its side. Uproar! should really end with a interrobang, as the exclamation itself doesn’t do it justice, nor does it ask the important question. Why?

Why, in a time when so many great games exist on every platform, when a dollar can buy you hours of entertainment, do we continue to see half-realized (a kinder word for it, half-assed is what it really is), completely irresponsible releases like Uproar!? And that’s not meant to be an interrobang, but a legitimate interrogative. 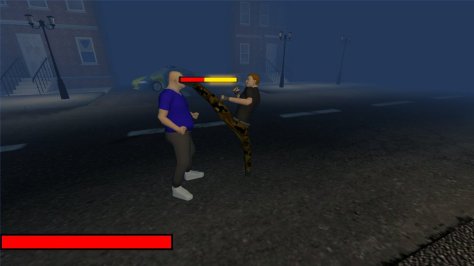 A 2D beat ‘em up with 3D assets and environments, the game masquerades as some kind of poor Double Dragon / Final Fight homage, with thugs conveniently waiting in line to be throttled by our Hero Pugilist, working without a backstory or motivational event to explain why he’s punching and kicking the expressionless crud out of every white person with a shaved head that crosses his path. City in Chaos! screams the box art. Really? I saw one car on fire through four levels of urban / rural blandness. If that’s the definition of chaos, then what’s considered Armageddon? Two cars on fire?

Uproar! is a laundry list of troubles. Despite all of the action taking place on asphalt, the character moves like he’s been dipped in molasses and slides to a stop as if he’s on ice. The controls are equally questionable, with button inputs that only work some of the time (try alternating punches and kicks; it’s like the game has to invent the animation on the spot). To make matters worse, our protagonist seems to suffer from a recurring phantom pain, taking invisible hits outside of combat that drain his health. No idea what’s happening there.

The odd behavior continues with the enemies as they wander into frame, blocking the view and punching the air randomly around you, practicing for their death animation or just hoping to create a tear in the space-time continuum so Elizabeth (BioShock Infinite reference) can pluck them from their current reality and re-seat them in a world where Uproar! never existed. My money’s on the latter. 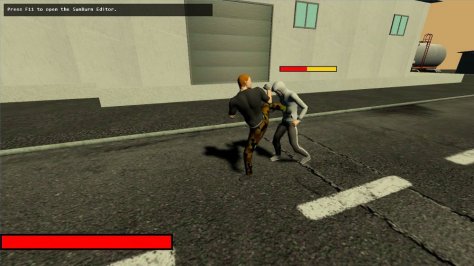 Difficulty, too, is nonexistent. You’re never in any serious danger so long as you button-mash, which can interrupt most enemy attacks. A few basic combos will help, and utilizing a dropped weapon is basically a license to win, though beware; the cherry on top of my time with the game was encountering a Code 4 during the last level’s boss fight, while carrying a hammer. Granted, it only takes about twenty minutes to reach that climactic battle, but I refuse to pummel my way back to that point to see how it ends. I know too well the in-between, and that’s bad enough to have committed to memory.

The only uproar that Uproar! is likely to cause is a riot among wallets at having been swindled out of three dollars, and the shame that very public knowledge will bring when forced to admit it. And ‘swindled’ is indeed the operating word here, as you are receiving nothing in return.

In my heart, I was hoping this was some fan-made labor of love starring David Boreanaz as vampire. Wishful thinking, I guess you could say, as in Fallen Angel (80 MSP), you’re a French guy with a ponytail who is not David Boreanaz, taking on various missions in an open-world Paris that’s not bad looking by indie standards. Unfair or not, from the trailer you get the impression you’re in for a Grand Theft Auto-like ride, albeit on foot. This can’t be further from the truth.

The insinuation is you’re an angel, the circumstances surrounding that revelation unknown. Blessed with the ability to see the wishes and dreams of others, you now spend your days and nights bailing out perfect strangers with random acts of kindness, similar to the Nic Cage movie but without Meg Ryan or all the sappy parts.

It starts innocently enough, picking up gifts for people’s kids (turns out everybody’s birthday is today), but quickly goes dark. My question is, if you’re an angel, wouldn’t your moral compass point due north, without waver? Instead, you’re ‘stealing’ one mission, escorting a dealer to a drug sale the next. Hardly God’s plan, if you ask me. Then again it’s been a while since I was in Paris; maybe their idea of what constitutes being a good samaritan has changed.

That moral quandary aside, the gameplay is exhausting and repetitive. One dull Retrieval or Escort scenario after another, which is the good life. Bomb Defusing involves plodding along the city streets for literally minutes at a time. Sound fun? There’s no actual defusing either. It’s like a checkpoint race with an amazingly inadequate timer.

Completing missions levels up your character, which advance the ‘story’ and grant him new, obviously ‘angelic’ abilities, like car-surfing (because that’s never a bad idea). Fighting in Fallen Angel is just as boring and half-assed. You have a strange ‘energy wave’ option and a roundhouse kick at your disposal, neither of which is a pleasure to use. It’s all spam attacks, and all of the enemies shop at the same uniform thrift store, where lime-green is the only color and always in stock. 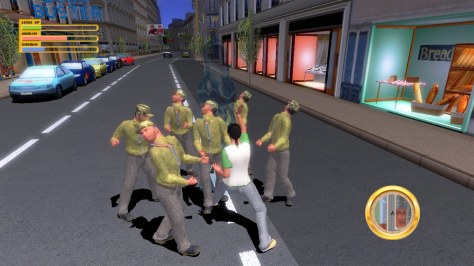 Guys, serious question: Is it cheaper to buy in bulk?

For being an open city, which would suggest exploration, you’re actually better off staying near the center, where most of the shops are located. Taking missions outside of that central concentration will only lead to long runs / rides, or, even worse, the Escort missions where you’ll have to walk the whole time to avoid separating from your contract. Besides gambling with your experience points at the occasional slot machine, you’re not missing much. The city may be detailed, but it’s all facade. You can’t even visit the Eiffel Tower up close.

I stuck around until I’d gained enough experience for level four (a half hour struggle), which touted the ability to fly. Parisian sightseeing from the air? Sure, I’m in. Though even that potentially cool component is wasted on clunky, limited controls that suck up your energy in a few short flights, forcing you into completing more of the fun-killing side missions to refill your meter. Ugh, no thanks.

The entire goings and happenings of Fallen Angel are brain-softening. It’s a tech demo, piecemealed into an overpriced game. I applaud the open world aspect and the general idea, but everything else about it is beyond lackluster and straight up insulting. No one playtested this other than the developer, I’m certain. If they did, they would have realized there isn’t an ounce of enjoyment here.

EDIT 8/27: An update for the game has been applied, the most important tidbits of which are the reduction in price (dropped from 240 MSP to 80 MSP), significantly reducing the amount of XP needed to advance in-game, and improvements to the HUD, animation, and the flight system.