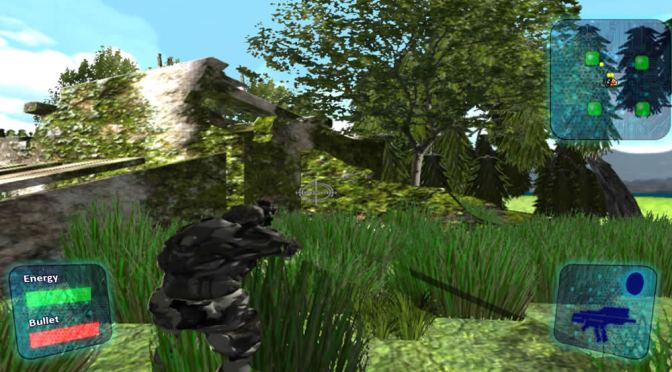 Fighting off the previously-reviewed Assault Ops for ‘most generic title’, the also-combative Space Assault ($1.00) features a generic every-soldier, doing battle with a host of alien machinery. Also, there is no ‘space’ in Space Assault, as far as I can tell. Every stage takes place on a post-apocalyptic Earth-like planet. Well, you hop from one level to the next in a spaceship. Er… fine; there’s some ‘space’, but it’s still heavily terrestrial, hopping from and to a series of Earth-like planets, equally post-apocalyptic.  …You get the idea.

Regardless of the ratio of ‘space’ to ‘not space’, Space Assault is a third-person shooter. And the game’s description couldn’t be more applicable to the minute to minute gameplay: ‘Destroy the enemies, find the key, and enter in the portal‘. It is exactly this, unwavering in that dedication, with some slightly-altering scenery.

Each stage begins by dropping you in a large arena, either being shot at or soon to be. Your enemies are the standard, run-of-the-mill types (a mech, a drone, some kind of ‘gorilla’ mech, maybe?) and sparsely-animated1. Also, they are indistinguishable from a distance… and bullet sponges. Thankfully, combat isn’t required. You only need to find the key in each level, then head for the exit. Should you need it, there is a minimap, one you have to (bizarrely) seek out via an item pickup2, along with ammo and health refills.

It’s simple, if inherently repetitive. What this info and the static screenshots can’t show you, however, is how slow and clunky it all plays3. Space Assault treats third-person shooters like it’s a brand new, still-developing genre. It has awful controls, a tank-style scheme that really doesn’t want you to turn effortlessly, or walk and aim at the same time, or have any fun with the combat. Its weapon ‘zoom’ goes too far, and hip-firing makes it hard to line up shots. While the game’s difficulty is tuned in your favor, you’ll certainly be fighting the controls more than your enemies. 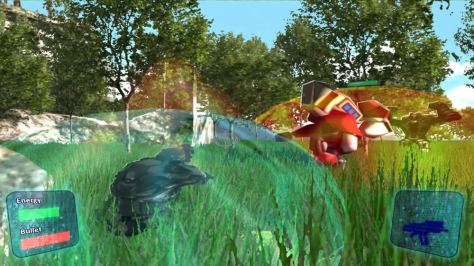 Complicating this is the character’s incredibly-slow movement speed, turning every level’s ‘key hunt’ into a protracted slog. In fact, you’re better off jumping through the entire level, …provided you don’t get caught up on any of the scenery. When you do finally nab the key and advance to the next planet, the game tallies your score and the process repeats ad nauseam.

Needless to say, Space Assault makes it extremely difficult for you to like it. The repetition is one thing, but the obnoxious controls, the bugginess, and the otherwise generally-sloppy design do nothing to help the cause. This game is a literal chore to play, and you should avoid it at all costs.