Since honesty is (unfortunately) always the best policy, outside of the first two Hothead-developed games in the Rain-Slick (eventual-)Quadrilogy, I’ve never been much of a Penny Arcade fan. Ditto for Zeboyd Games; I haven’t played either of their previous and well-received RPGs. Zeboyd’s track record and the Penny Arcade name are an obvious boon to the XBLIG channel, though, and On the Rain-Slick Precipice of… um, I mean Penny Arcade’s Rain-Slick 3 (400 MSP) is at once both a familiar sequel and a whole new experience on it.

Gone are customizable protagonists and the comic-style art, but Gabe and Tycho more than manage in ‘your’ absence, as the series’ signature wit and charm are in full 16-bit bloom, thanks to both Zeboyd and Holkins. Prior time with the originals is not needed, though for fans the references and returning characters / locations of New Arcadia are plentiful.

The battle system remains turn-based, but receives a boost to speed and fun. Counterattacks are replaced with interrupts here, which are just as important in turning the tide in tougher fights. It also has its share of complexity, and PA3 gradually ropes you into the loop with its Class-Changing Pins (vaguely The World Ends With You-ish and awesome), which allow you passive abilities and unique skills to call upon in battle. The pins’ effects split their worth between serious and comical (change into a velociraptor… clever girl), but each has its effectiveness. Equipped class pins (2 slots per character) earn XP faster in battle, though the game graciously levels up all pins, even those not currently in your employ, as incentive to continuously combine and experiment.

Your health refills after every fight, same for items, leaving you to buy ‘upgroids’ to increase potency and usage only if you’d like. PA3 may take the form of an old-school menu-driven RPG, but it’s built with less micro-management in mind. For that, I am grateful. I quickly settled into a comfortable pin setup and pattern, which held its ground for the majority of the game but made some of the lesser battles stale as it wore on. I played on Normal, and maybe was in danger of dying once or twice (save for the second-to-last boss, cheap bastard). 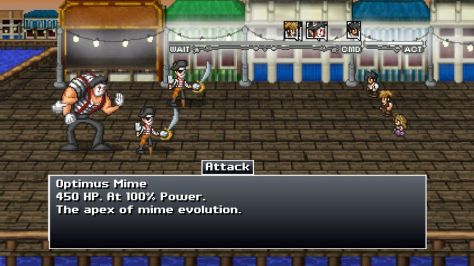 Of course, fighting becomes secondary to the bizarre ride PA3 takes you on; the Necrowombicon book rears its blank pages again, the-villainous-after-all Dr. Blood picks a side, and all manner of Brahe family secrets come out. You can only find an eloquent, tuxedo-wearing T-Rex or a faithfully-recreated, conventional JRPG world to poke fun at in so many games, you know, buoyed by the great writing / character-building and even greater humor you expect. The quest will run you about 6 – 7 hours, and you’ll want to examine every nook not just for treasure, but the next hilarious anecdote or enemy description.

Penny Arcade’s Rain-Slick 3 picks up right where I left off, enjoying the hell out of it. Oh, and it’s an excellent reintroduction / continuation to the series… blah blah fancy review-speak, etc., not that I ever really doubted it would be. Easily a leaderboard game that has my money for the 2013 conclusion already locked in. The price may scare some off, others by critics that claim XBLIGs are a waste of time and money, and to that I say it is truly their loss.