Besides the obligatory Night Trap and a half-dozen Chris Antoni horror games, I’m not well-versed in the FMV genre. I’ve never been particularly impressed with them either. They’re usually short experiences, highly repetitive, and ridiculously over-the-top in terms of both storyline and acting1. Press X to Not Die ($2.99) is all of those things. It’s also good, clean, stupid fun.

Setting the story in a nondescript suburb at the onset of a pseudo-zombie apocalypse (the type where you just know the government’s involved… and it is!), things start off with a healthy hatred of M. Night Shyamalan’s The Happening2 and a simple, one-button command, Press X to Not Die3.  That advice serves you well as you dodge zombie-like attackers (also a clown, and a hockey player… in full gear?) en route to various locations that conveniently advance the plot and / or invite you to watch your girlfriend shower4.

To its advantage, Press X to Not Die is readily aware of its cheesy nature and its shortcomings as an FMV game, as well as that of the entire genre. And it is in that self-aware knowledge that the game does best, phrasing its dialogue and presenting its characters all in the guise of a videogame format, giving you an adequate excuse for pressing X and / or mashing buttons to survive. The timing for these prompts is altered with the level of difficulty selected, and the game tracks your ‘score’ based on how well you do. 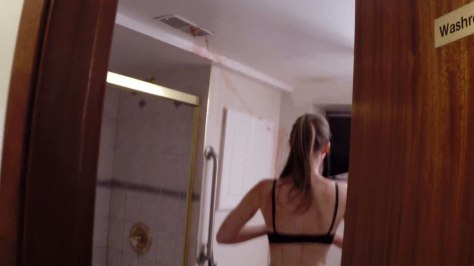 To add to the immersion and mix things up, the game’s dialog changes depending on choices you make or how poorly you perform, reciting the number of deaths you’ve suffered, say, or chastising you for being a pervert. It’s a nice touch that somewhat customizes each person’s playthrough, without straying too far from its wacky pace and ‘campy’ feel throughout. There’s even a mode that gives the game a retro, pixelated look if you prefer your footage grainy (which, admittedly, sort of adds to its charm).

You shouldn’t expect longevity (probably 30 minutes to complete) or a hugely-satisfying conclusion to wrap things up (that’s saved for the sequel, natch!), but Press X to Not Die‘s tongue-in-cheek performance ultimately wins you over. It’s clearly a passion project, and with all its clever interactive bits and self-referential humor, it’s one you should happily take part in.