Honestly XBLIG, what took You so long? I expected this a week ago. You’re getting sloppy on me. Rhetorical questions aimed at inanimate Indie Services notwithstanding, there’s not another game in very recent history that has struck a chord (good and bad) quite like Flappy Bird. From massive success ($50,000 a day just in ad revenue is nothing to sneeze at) to constant Twitter harassment and its eventual yanking from the app store, or from a MMO to $1500 iPhones that have the game installed, it’s been a tumultuous and ridiculously-overpriced ride.

But, as they might say, The early (flappy) bird gets the worm, and developer NeuronVexx is the first XBLIGer to jump on the Flap-alike bandwagon with Little Flappers ($1.00). In case you’ve somehow managed to avoid the entire dust-up about Flappy Bird by doing something far more constructive and worthwhile for the human race (something I wish I could say about myself), the idea is simple enough— Guide a bird, by tapping to flap its wings, through a never-ending obstacle course.

Gone are Mario‘s iconic green tubes and their wholesale theft; the little bastard now gets hung up on spinning blades of death (call it Flappy Bird meets Cute Things Dying Violently) should you fail to maintain a rhythmic balance. In are three separate modes. ‘Classic’, with stationary blades, or ‘Advanced’ and ‘Insane’, which feature moving variations of the same hazard, and some coin collection to increase your score. Also in is multiplayer runs for up to four players (or AI birds) locally. 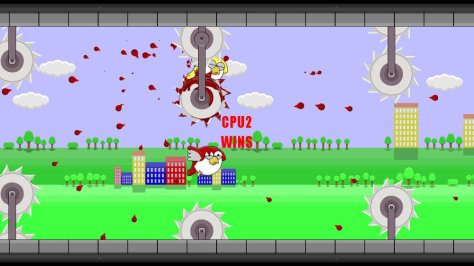 Duhn duhn duhn… another one bites the dust.

Though something like Little Flappers begs the question— With so many derivatives and freebies already available, why would anyone want to pay to play what arguably is a rage-inducing. also-derivative, complete waste of time? Because you love to rage, perhaps? Or maybe you prefer better odds (this bird is infinitely-easier to control), or the chance to show off your feathered prowess on global leaderboards (all three modes have their own scoreboard). Save for some lag when those leaderboards update (a fix is forthcoming), the game copies the polarizing format well.

So, if you can look past all the controversy and appreciate (without forgiving or absolving) the social phenomenon that Flappy Bird was / still is, then Little Flappers is a (almost) direct descendant of that idea. Quick cash-in? Yes. As stupidly-addicting? Yes again. If you’re only in it for the mild curiosity, though, you could just play Flappy Doge, and kill two birds… er… a bird and a dog… er… a bird and a meme… er… a dog bird… er… a doge bird, with one stone.