For a dungeon crawler, Dungeon Smash: Dark Isles (80 MSP) plays it rather blandly by the book; princesses have been kidnapped, and you’ll need to island-hop by descending dark floor after dark floor filled with orcs, imps, etc., etc. Even the ‘rescuing’ part falls to two non-descript warrior types, complimented by Jessica Alba (Xan) and a blonde Alyssa Milano (Shayleah). No, it’s not really them, but the resemblance is certainly there. Haiku Interactive must be a fan.

Dungeon Smash is split into two settings; the story-based ‘Princesses’ Tale’, or the survival-tinged ‘Dark Tower’, which throws 100+ floors your way, if you’re feeling peckish. Online leaderboards track your score in each, and a gallery of the game’s art is unlocked with completing challenges. All nice ideas.

Combat is a straightforward, no frills task. Bigger usually equals meaner. Just keep plugging away until your target becomes a blood splatter. Depending on your character and skill loadout, the game can play as either a twin-stick shooter or straight hack & slash, with gold amounting to skill points, spent between floors. These cover your typical boosts to speed, health, or magic, and assign you new powers and attacks.

One of the larger selling points of the game was to be its story, with multiple endings and seeing how each character’s motivations direct its telling. Sadly, that story never really takes off, leaving dialogue and developments to feel more like your own guesses than reactive exposition. Is the villain really evil, or just misunderstood? How can I know when I’m not given much evidence to support either theory?

The in-between gameplay feels off as well. There’s a cool ‘shadowing’ effect used to shroud a level’s floor plan, but other than that, Dungeon Smash’s randomized stages are among the most visually-bereft and haggard dungeons I’ve seen, with same-y corridors and repeated dressing. Also, do not adjust your sound system; the in-game volume is set strangely-low. None of those parts on their own do fatal harm, but when added up, it’s a little more detrimental. 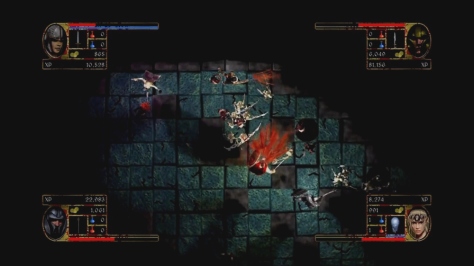 You can get by with a little help from your friends.

The game also continues a (troubling) recent trend of being balanced strictly for co-op in later levels, leaving solo players to fend for themselves against increasingly tougher and more numerous enemy waves. It seems no matter how you level up, focusing on character stats or adding a magic / weapon attack, you will always come up just short by playing alone. Carrying multiple mana / health potions will raise your chances at survival, but at the cost of tedium, funneling enemies into corridors to face them head on, two to three at a time. Even then, multiple rooms to clear means one false move can reset your progress.

Dungeon Smash looks and feels the part, but veers into difficult territory if you’re not spelunking with friends. Given the lackluster story and barren dungeons, there’s not much incentive to see it through either way, and the blandness will likely prohibit whomever is left on the fence. It might make for a manageable trek with two or more players, how it was intended to be played, but if you’ll be going at it alone, your best bet is to pass. Let Jessica and Alyssa tackle this one.