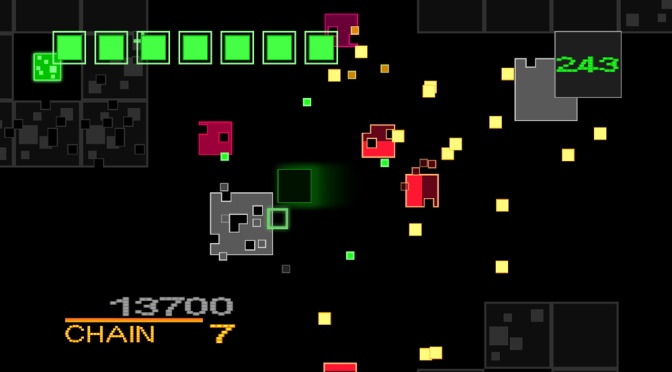 In a lot of ways (and not just in videogame form), Disastr_Blastr ($1.00) fits modern society’s chaotic pace, evolving sense of style, and constant need for gratification. There’s the truncated title words, for starters, ready-made for texting shorthand, and the twin-stick shooter genre it belongs to is about as close as you can get to mainstream consumption, combining arcade-style high-scoring and that maddening, ‘one more try’ flavoring that keeps you hooked despite your many disappointing deaths.

Then there’s the abstract visuals (cubes, cubes all the way through1) to consider, or the new age rule sets that pop up in each stage to keep things busy and upturned (the word ’emergent’ makes an appearance in the description). Gameplay is all at once fast, interesting, confusing, precise, and nuanced. Oh, and evil. This game can be so very difficult2, too. But more on that later.

At its core, Disastr_Blastr is a straightforward shooter; you’re a cube destroying other cubes, some bigger and more complicated than others, sure, but cubes nonetheless. The game’s stages are laid out in grid format, with you completing them in any order that you choose. Adjacent levels are unlocked when you complete a stage, opening up new paths and / or challenges. Scoring, too, works as you’d expect, as chaining kills together will increase your combo, completing a map quickly will add any remaining time to your total, etc.

Where Disastr_Blastr differs is in its stage design and objectives. Levels can alternate between scrolling and free-range, between claustrophobic and open, branching and linear. You may be asked to fight to the exit in one, destroy a certain color cube in another, or seek out items hidden in breakable blocks. There’s some tough boss encounters, and hidden special stages, all of it set to a timer that likes to remind you that everything has an expiration date3.

Even the powerups you pick up have to be carefully considered. Find a spread shot to cover more ground, but you’ll lessen your overall firepower. A laser beam will do focused damage, yet you’ll be screwed once the bigger cubes break apart and create dozens of smaller cubes, backing you into a corner. How and what you choose to attack is just as important. Enemies bounce off each other and ricochet off walls, leading to unpredictable results. And sometimes, impossible odds. 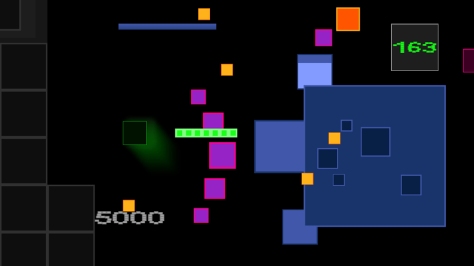 And that can be a problem. Disastr_Blastr is not for the meek or the casual crowds. There is no health bar. The game’s one-hit-means-death mechanic is no joke, mercilessly killing you over and over until you’ve learned a lesson or lucked into a narrow completion. Even in the first ‘world’ set of levels, death is a constant companion. On some of the tougher, longer stage assignments, one simple mistake can reset your progress and really prove disheartening. You can retry a stage as many times as you like, but failing to finish one level may wall you off from accessing other levels, or force you to chart a different route.

Mileage will vary with each player’s skill and patience, and because of that, I’m left with an uneasy recommendation. On the one hand, the game looks great, plays great, and smartly considers the limitations of the genre to create a satisfying, evolving shooter. On the other, it’s immensely challenging and potentially exclusionary, which might rightly turn some players away from it. One thing is certain; Disastr_Blastr is dangerous cubes.