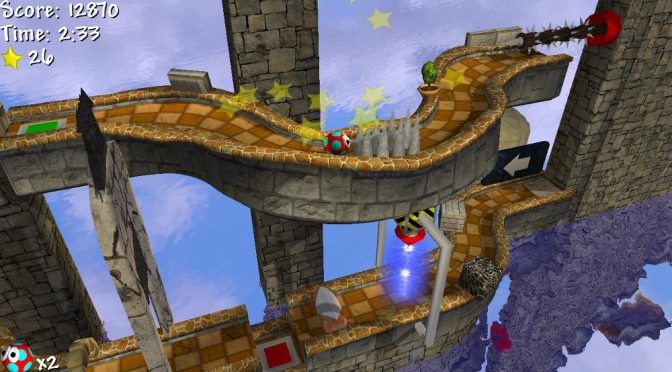 Platformers not starring Mario or promising some never-before-seen mechanic have an uncanny knack for underwhelming (read: just competent), and that’s understandable; there’s a lot of them. At first glance it might seem trivial or unimaginative, though On a Roll 3D (80 MSP) is not just a self-clever title telling you what to expect; it’s essentially Sonic the Hedgehog, with a lot more roadblocks. 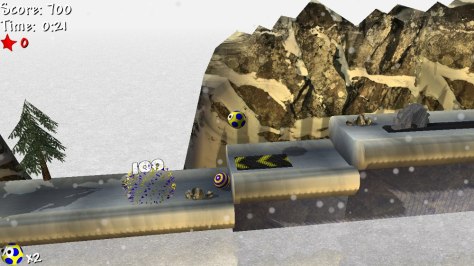 As a sequel to the decidedly un-3D On a Roll, the game makes the transition to a pseudo third dimension (you’re still moving on a flat plane) beautifully. Everything is sharp and richly detailed, and the ‘Sonic‘ mention is more than observational. Your well-rounded protagonist’s hit points are measured in stars instead of rings, checkpoints and stage transitions are clear homages, and the level layouts themselves will channel the blue mascot’s spirit, with spring boards, occasional around-the-world arches, and twisting paths sprinkled in. Dr. Robotnik could move right in and start some trouble, no problem.

Don’t expect to fly past it all in a blur, however. Your ball doesn’t do anything fast, and it’s hard to build momentum or get the ball rolling (pardon the expression), as any burst of speed you attempt will typically result in you hitting a roadblock (column, environmental object) or running directly into a hazard or baddie. The game is also puzzle-heavy, constantly stopping you to turn on switches / levers, or drop a box / roll a log into place in order to open the way forward. Odd, given the game’s inspiration, that you should have to move carefully and deliberately to advance.

Though mascot or generic, quick or slow, there’s a lot be said for pleasant platformers— warm colors, the leisurely stroll, a few clever tricks but otherwise low impact. A handful of hours spent not pulling your hair out over some obstinate sequence, but just collecting, bopping a few heads, and generally moving from left to right. This is where I thought On a Roll 3D was headed. And it does deliver on that, for the first half of the game. Well, for most of the game, really, minus the boss stages. 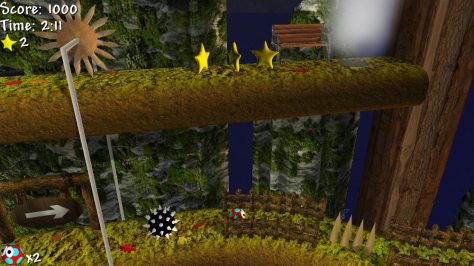 It’s those balled-bastards (and not the stop-and-go gameplay, ironically) that will sap your good times. The game features 24 stages over six themed worlds, with a ball-boss fight at the end of each world. You’re given two hit points to work with on an enemy that takes about ten hits to defeat. The first two fights are fine, but from three onward, the boss develops either an erratic movement set, invulnerability (retractable spikes), or some combination thereof. It’s not impossible, but you can expect profanity and quite a few retries in your future.

If you don’t mind the jarring frustration those fights will bring (or if you’re just laughing at my inadequacy), then the rest of On a Roll 3D shouldn’t spoil your fun. It’s slow-moving in spots, though the bright visuals, soundtrack, and online leaderboards will help keep you motivated and on the path. Quirks and difficulty spikes aside, there aren’t very many indie Sonic-likes that look or play this well.