In the interest of fairness, E.Y.E.R.I.S. ($1.00) is technically available to all without an Xbox. Its origins as a browser game isn’t surprising, given the simplified design and control, and the Xbox version looks nearly identical. It’s plenty odd, to boot, starting with the giant eyeball in the middle of the screen (and the obvious play on the word ‘iris’). It’s also a bit of an existential thinker, which makes it a perfect fit for the oddballs on XBLIG.

To an extent, E.Y.E.R.I.S. is a kind-of Rorschach test within an otherwise basic twin-stick shooter, asking you your opinion about a set of melancholic questions or statements between each stage. You’re given a handful of entirely-visual choices to choose from before moving forward, each thus affecting the gameplay in subtle ways, sometimes immediate, sometimes delayed or not as obvious.

There’s no written explanation to rely on, and no right or wrong way to play the game, although certain ‘answers’ you pick definitely have an impact on how easy, or how hard, the game will go after you. This can affect your type of ‘bullets’ used, the firing rate, or your ‘health’ and the rate at which it recovers… if it does as all. 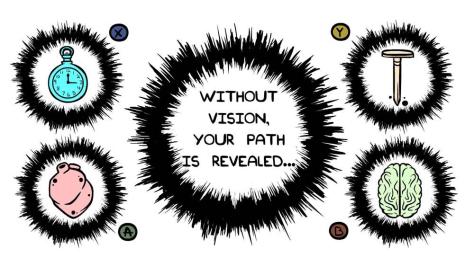 This is your choice of ‘bullets’.

That sliding bar of difficulty, represented by swarms of various ‘bugs’ and exploding projectiles, can be off-putting to some, although I enjoyed figuring out the different methods and effects in each round of answers (you can sort of infer what some images entail). You only get a set number of lives (3) in each playthrough, but it’s not terribly long to reach your previous point once you’ve gained some insight.

Depending on your choices (and skill), the game can be over very quickly (15 mins.) or it can beat you to a bloody pulp. You can tell the truth, or you can lie to yourself and see the differences. The gameplay may not ultimately be as sophisticated as its intentions, but I’ll be damned if I didn’t like E.Y.E.R.I.S. It’s the kind of offbeat stuff I look for in games, and worth your time to play something from a different perspective.