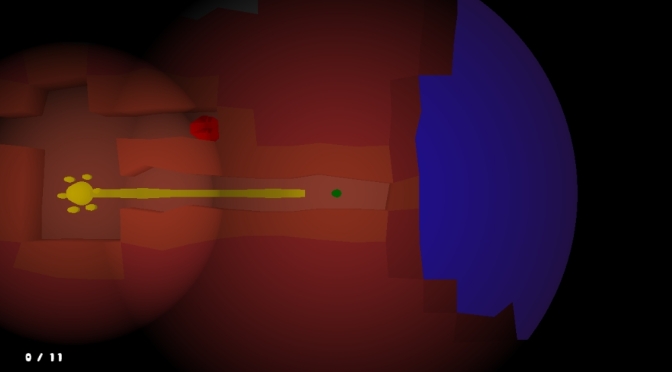 Though it’s often dismissed as the sign of an inexperienced developer, ‘simple’ can be an effective selling point to your game. A Light Start (80 MSP) has little to show off, and even less gameplay; the entirely of the game has you (a dot) ferrying energy (also a dot) to your Queen (a Sun), in order to fill some unforeseen lightness quota and brighten the world, or some such metaphorical-ness.

With only a handful of colors / blocks, the minimalist art works surprisingly well, and the procedurally-generated levels alleviate some of the blandness and fatigue that goes along with repeat business and style. Digging your tunnels and scouting for energy moves quickly, albeit it with a convenient limitation (only one bit of energy can be handled at any time). Of course, the whole endeavor would be pedestrian without a fight or threat of demise, and there are some hazards that come with the job.

Enemies dig towards you (at a much-slower pace, naturally) as you work, adding extra tension and tunnel babysitting to the mix. While you can fill in open space to block them off, to do so requires just enough time that you’ll want to leave some breathing room. Water represents another environmental wrinkle, flooding your constructed highways slowly but surely and wiping out everything in its path, including you and the Queen. Placing makeshift dams and / or working around a liquid barrier soon becomes second nature.

All of these things considered, you’ve got yourself the makings of a pretty tough game. And it’s certainly up to the task, making A Light Start a contradictory title. Things most definitely do not play lightly, with trouble literally looming at the start or end of every tunnel. Find yourself cut down by an enemy, and you lose ticks off your current energy progress. Drop to one, and you’re doomed to a restart.

Of course, you can always pick another map should frustrations mount. A Light Start is essentially limitless, with ten ready-made stages and a level editor to design your own ‘rat in a cage’ simulation. If you like the challenge of random layouts but lack the time and / or energy to build a masterpiece, Quick Play will handle the heavy lifting for you.

The game’s slight yet engaging style, and tougher-than-it-looks difficulty, might turn off some. It’s not incredibly deep, nor does it claim to be. Still, there’s a certain charm (and deceptiveness) to be said of that simplicity, easy to pick up and play around with. So far as tunneler / puzzler hybrids go, A Light Start is a good start.