As you can no doubt surmise from the screenshots, Ghere Games’ Last Stand ($1.00) is a wave shooter1 featuring the ever so undead, set in a dreary-looking underground bunker populated by yourself— the only ‘living’ resident— and a horde of snazzily-dressed yet oddly-shaped zombies. You can probably guess what happens next, and what your job in this apocalypse is going to entail. 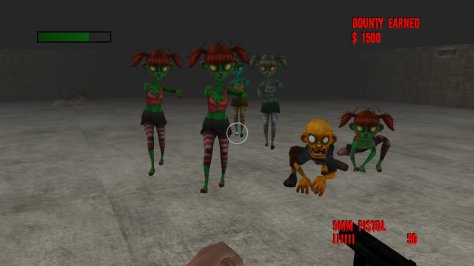 Following the well-trodden path of Call of Duty‘s formula for dispatching zombies, Last Stand takes place in a series of similar (like really similar, like exactly the same) rooms, walled off by barricades that can only only be felled by the hard-earned cash2 you get from eliminating those undead. The zombies themselves will occasionally drop ammunition and temporary buffs to aid in your quest for money and bunker space, such as double cash, double-sized magazines for your guns, and an insta-kill powerup.

That money can also be used to buy a trio of new weapons beyond your trusty starting pistol; a shotgun, a semi-auto rifle (think sniper), and assault rifle. Your upgraded arsenal comes in handy, as the zombies will get more powerful as the round goes on, requiring multiple shots to finally be put down.

And you’ll wish they didn’t. The combat is dull and repetitive, as are the zombies’ damage animations, strangely morphing from walking, to crawling, then back to walking as you shoot them. Add to this a lot of other annoying little issues and glitches, such as getting stuck in doorways between rooms, zombies running in place (oh, and invulnerable to boot!), weird pauses and hiccups in the game, and it all makes for a very unsatisfying experience.

One you’d be keen to avoid. It’s functional (to an extent), but cheaply done, a drag to look at in motion, and even more lifeless3 than one of the developer’s previous, Zombie Hunter IV. Even excusing the use of the undead (which I’m not) and grading it solely as a wave shooter, Last Stand isn’t very competent, or fun. At all.