Imagine if someone took yours and my beloved Contra, replaced every character and enemy with squares and rectangles, cut the game’s length down to a third, stripped it of most of its alien / 80s dudebro charm, and released it as Ultra Aktion!12 ($1.00). In essence, that’s what you’re getting here.

And much like Contra, there’s not much to Ultra Aktion! other than said dudebro3 shooting. ‘Evil is bad / Kill evil with guns / Save world’ is the game’s entire justification (albeit satirical) for its setup. Not that it needs much of a setup. It’s pure side-scrolling shooting with a solid feel, replete with familiar Contra-esque gun powerups (the ‘spread shot’ is still God, all these years later) and blocky environs that vaguely resemble the style of those retro levels.

You can play though the rather paltry three levels alone, or with up to three others in local co-op, but there’s not much reason to. The whole thing can be completed in less than fifteen minutes, with the levels just looping back around until you run out of lives (the game isn’t that difficult) or just give up and return to the menu. Minus the aforementioned powerups, Ultra Aktion!‘s casual design doesn’t evoke much nostalgia, and plenty of other games have done far better at mimicking what makes Contra work. 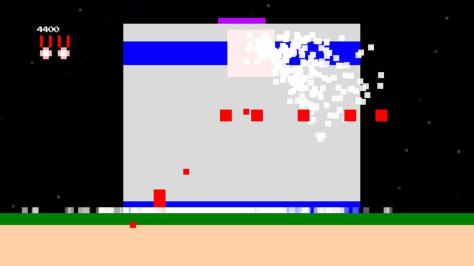 So it’s hard to figure who would be interested in Ultra Aktion! The game is honestly and correctly labeled as a ‘short’, which is probably meant to excuse its simpleness and brevity, but that’s not to say it should be forgiven for it. Were the aktion…. ummm, action… onscreen a little more competent or unique, it might not have mattered. As is, Ultra Aktion! is better to listen to for its chippy soundtrack than take part in its terribly uninspired gameplay.