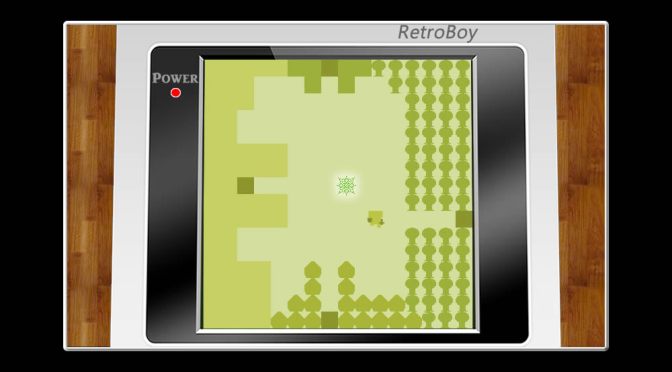 Ah, that new console smell!— coming from a faux mobile device invented purely for the sake of shoving yet another XBLIG ‘classics collection’ down our throats, of course, but I digress. Yes, your fancy new RetroBoy V1 ($1.00) system is in fact a Game Boy brother by another mother, and yes, that means you’ll get your interactive fix in two or three splendid shades of puke-covered green. Assuming you dig your games in that color of not-so-awesome sauce.

RetroBoy V1 comes in one of six assorted flavors for you to try, including such ‘classics’ as Pong, Snake, and Flappy Bird1. Here, all of them play exactly as you remember, with no new twists or changes of any kind. That kind of renders the whole thing moot from the start, but it does serve as a convenient gathering of games in one place, should you be of the 1% of the gaming population that hasn’t played a version of these ‘classics’ at some point in your life.

While the requisite ‘brick breaker’ and Space Invaders types still have their easy-going, arcade-ish gameplay to fall back on, the rest of the titles somewhat show their age in comparison. Pong is drab-looking and boring against the simpleton AI, while Snake‘s antiquated dot-eater mechanic pales up against the slicker, present-day stuff like qrth-phyl.  Sucking the color out of everything to fit RetroBoy V1‘s forced aesthetic certainly doesn’t help the presentation.

The odd man out in this collection is Adventure, a pseudo-RPG, pseudo-Zelda button-masher that sees you blazing through fights and leveling-up in order to face off against the four ‘bosses’ of each land (don’t get excited; the entire game is three screens long). The look of it is certainly ‘retro’, though the gameplay itself is frenetic and forgettable. You can mow through it in about five minutes.