I’m not exactly sure what the ‘T-Kara’ in Mexond‘s T-Kara Puzzles ($1.00) stands for, but it sounds like some KPop Supergroup culled from my beloved T-ARA1 and fellow group KARA2. Sadly (for me, at least) it is not. Rather, it’s a Match-4 puzzler in the vein of so many Match-4 puzzle games that have come before it. That said, it’s still not a bad time-waster / brain-twister at that.

T-Kara Puzzles is comprised of a variety of play modes, most built around the idea of matching four similar colors in a row and / or column. This is accomplished by ‘dragging’ said rows or columns in either direction3, sliding blocks into place and removing matched-up blocks from the board in order to increase your score. The robust ‘Campaign’ setting takes this simple idea and expands on the theme, adding in modifiers like scoring within a preset zone, maneuvering around ‘locked’ blocks that cannot be moved, and forcing you to acquire a certain amount of each ‘color’ to move on.

Besides being a much needed refresher (this type of game can tend to wear on you over time), these clever conditions for victory inject a fair amount of strategy, considering you usually only have a certain number of moves to make per round. The difficulty ramps up as you unlock the next stage in line, natch, but the game does an adequate job of explaining the rule sets and giving you ‘hints’ on which row / column to move next. Often times, you’ll need to play it off like a long con, setting up ‘combos’ that can save you a turn and clear larger parts of the board like falling dominoes. 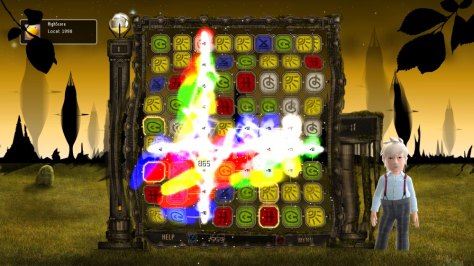 Outside of the dozens of levels found in the Campaign, you’ve also got a ‘Score’ and ‘Picture’ mode to mix things up. The Score scenario gives you one life to— you guessed it— score as many points as possible4, while the Picture gametype scrolls back the match-4 rules and modifiers, and just has you dragging puzzle pieces to eventually form a completed picture. Both modes are worthy accessories to the campaign, adding even more variety.

The game has charm, too, and working smartly around the various conditions and caveats that each board requires definitely gives you a sense of completion and satisfaction. It still boils down to being ‘another match such and such’ game, and I really wanted it to be a KPop supergroup, but if you’re hard up for a thoughtful and clean-cut puzzler, T-Kara Puzzles is a nice fit.