Fat Cow – Hot Air ($1.00) may be a slightly-less awesome title than one of 20 Goto 10 Games’ previous works, Magic Thighs & Slightly Phil, but it’s no less literal; you are indeed a large cow stuck in a bubble, using ‘hot air’ (…I’m assuming farts) to propel and boost yourself around some very claustrophobic stages. But that this particular cow’s name is ‘Hans Gruber’1? Now that’s awesome. 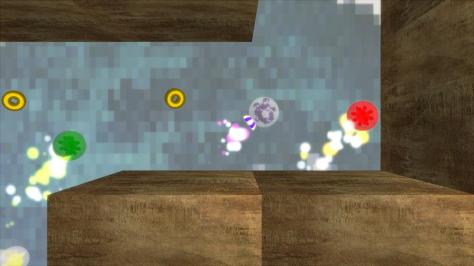 It’s just too bad ‘Hans’ finds himself trapped in an otherwise familiar and pedestrian-playing Maze game. Not that there’s anything ‘wrong’ with Fat Cow – Hot Air mechanically. The usual tricks apply— you navigate2 the increasingly-complex layouts, searching out other animal friends that double as ‘keys’. Collecting all of your pals opens the ‘exit’, allowing you to progress to the next stage.

Each level is timed, natch, and there are roadblocks thrown up to detour you. These include other floating balls that magically ‘warp’ you back to the starting line, and lava-lined walls that quickly suck precious seconds off your remaining clock. To counteract the hazards, you can collect coins to increase your time, and ‘zoom out’ to see a given level’s design, charting a route around dead-ends and avoiding any enemy-choked corners. Subsequent stages will up the number of foes or key-friends you’ll have to rescue, requiring more dexterity.

A zoomed-out look at a stage, obviously.

Despite the worsening odds, the game keeps things moving at a breezy and (mostly) casual clip, with you finishing one stage and quickly cycling onto the next without too much trouble. The only ‘challenge’ of it really comes from making a wrong turn, or trying to rush past a defender. Online leaderboards will track the fattest scores, and even then you can always retry the stage you failed, albeit with your previous high score erased.

And that’s about all there is to Fat Cow – Hot Air. Without any original bits or clever hook to the gameplay, it’s likely the game will deflate your enthusiasm after the first couple runs. If you’ve played one maze game, you’ve played ’em all. Poor Hans. Perhaps we’ll see him again someday. Godspeed, good sir… er… cow!