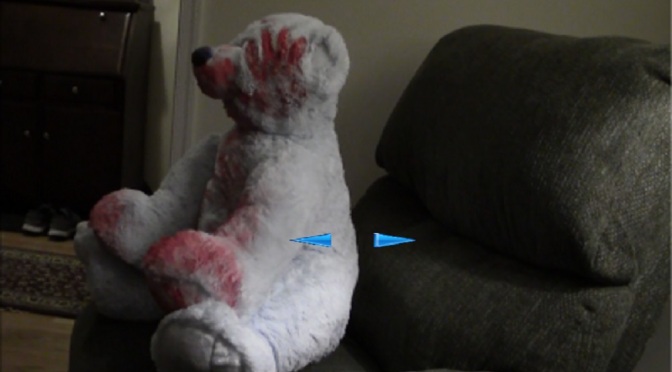 Really Scary ($1.00) is the fourth title (in as many months) from developer Chris Antoni to feature a low-budget horror set and Five Nights At Freddy’s– style jump scares, with the tension created by said scares meant to provide the enjoyment1 and impetus to keep playing. As with any long-running franchise, though, you risk alienating your audience with repeated releases that only fractionally change the core gameplay. Really Scary is thus really familiar, leaving this series (and its idea) running on fumes.

That depends… we talking about what I did last summer, or did I just leave the toilet seat up again?

This new outing attempts to once again mash together the two play styles of the previous games, asking you to navigate a supposedly haunted house via on-screen control prompts and tackle the usual gameplay of perusing in-house camera feeds in order to ward off your would-be murderers. Your chief antagonists here are bloodied and / or decapitated teddy bears speaking demonic gibberish (good nightmare fuel for your kids!), but the goal of survival and the perks of steady nerves remain the same.

There is some very light puzzle-work to be done as well, mainly in triggering the next ‘event’ or in choosing the correct door, but the real threat comes from watching your attackers inch closer to your safe room. Said intruders are scared off when you turn to face them, with the trade-off of having a limited amount of time to do so. Disappointingly, you should know the drill by now, and even these moments feature the same obligatory quick scares and sound effects found in the other games.

It should surprise no one then that Really Scary doesn’t differ much from previous installments (you have to give the people what they want, I guess), though it does offer up some of the smoothest camera transitions and pseudo-FMV so far2. That increased fidelity comes at a cost, however, as this game is also on the shorter end of playtime. It took me about 25 minutes to reach the conclusion, even allowing for a few mistakes in-between.

Brevity aside, there’s not much here that’s new or fresh enough to warrant another purchase, and the recycled bits have lost their edge. I hate to pull out this old gem of a saying, but if you’ve played one of the games from this collection, you’ve really played them all. Granted, there’s been some decent scares along the way, but let’s hope this series now takes a very long hiatus3.