Despite some crisp, cheery visuals and a lovable croc mascot with a football helmet, I didn’t like the original Croc’s World. Most of that had to do with the fact that it was almost a straight Mario clone, with no interesting bits or unique mechanics to define itself as anything other. Now Sprakelsoft has unleashed Croc’s World 2 ($1.00) upon the unsuspecting mobile and XBLIG masses, and… nothing much has changed for the sequel. It’s still an unapologetic Mario clone. 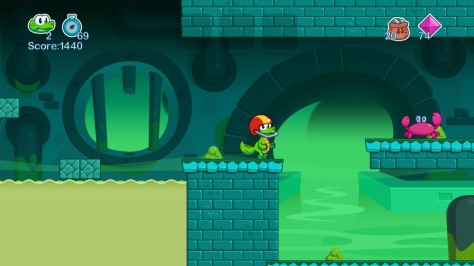 In a valiant attempt to cover for that, Croc’s World 2 has effectively ‘doubled-down’ on the content for this follow-up. While the original had a pair of world themes covering 30 stages, the sequel has four(!) unique stage themes, spread across 60(!) levels. It’s that classic sequel trick, using the fuzzy math of ‘more = better’. Tempting to consider, but the platforming remains as nonchalant and formulaic as ever.

Croc’s moveset is simple enough to master; he runs, he jumps, he collects diamonds in batches of a hundred in order to gain a 1-up. His ‘football helmet’ powerup mirrors Mario‘s ‘mushroom’, allowing you to bash bricks above your head and take one extra hit from enemies before dying. You can collect a second item, a bag of rocks (see Mario‘s ‘fire flower’) to toss stones at aerial foes or attack ground opponents from a safer distance. In a new twist, you can pick up an additional bag to turn your stones into ‘homing’ rocks, seeking out targets and simplifying the combat even more.

That over-simplification is a natural byproduct of being a port of a mobile game (just as the original was), yet the ease at which you can complete stages once again throws out any semblance of challenge for someone over the age of five. I consistently ran through most scenes at top speed, navigating the basic obstacles (think spikes, disappearing bricks, or fire hazards1) and taking down end-level bosses without a care. With plentiful checkpoints and unlimited continues considered, there’s really no way anyone can lose.

Once again, the only real challenge to be found is to figure out the bizarre reasoning behind your stomp attacks, and what can hurt you; bees and crabs are fair game to be bopped, while porcupines are strictly on the do-not-touch list. Even the boss fights, while appreciated, fall into the familiar rut of ‘platforming 101’— stomp them, wait for them to exit their ‘stunned’ animation, then repeat.

Inspiration in any creative design can be a very good thing— when it’s used as a model to advance your own ideas. Croc’s World 2 borrows too much from Croc’s World, which in turn borrows way too much from Super Mario Bros. Thus, there’s no reason to invest in this artificially-inflated sequel, unless you like generic platformers. I’ve said it before and I’ll say it again; why play a dumbed-down knockoff when you can just play the stellar original game it’s based on?