Yes sir, it is that time of year again. That time when we unanimously say, ‘Out with the old and in with the new’, make a whole bunch of resolutions we’ll have forgotten about by February, and hope the new year brings us some sort of sign / luck / love / money / whatever. And if not, we’ll complain about it on Twitter.

For ‘theXBLIG’, the end of the year means an all-new ‘Best-of’ list, narrowing down all of the games released in 2014 into one handy leaderboard, voted on by the community. That’d be you guys and gals, the loveable readership of this fine site1. Just like last year, I’ve rounded up my personal choices for ‘Game of the Year’, listed them in no certain order, then asked you guys to vote on them to see which game would come out on top.

Interestingly enough, though plenty have been spelling doom for XBLIG for some time now, I actually labeled more games ‘leaderboard quality’ this year than last. Whether that trend will continue in 2015 is anyone’s guess, but it’s not a bad ending to an otherwise up-and-down year. Seems you’ve felt the same way, as some games saw massive interest in voting, while others struggled to net a handful of votes. Strange times, but, without further ado, here are the Top …, excuse me, Top Nine (and one write-in), XBLIGs of 2014.

Fright Light is the ‘write-in’ vote winner, and I can’t be entirely sure that developer Chris Antoni didn’t just vote five times for his own game, but… so be it. Horror on the cheap, with visuals and production to match, Fright Light did its best Five Nights at Freddy’s impersonation, and didn’t do too bad at it.

Imagine a classic The Legend of Zelda game. Got that? Okay, now picture that series being handed off to an indie developer. Scared? You shouldn’t be, as Brushfire Games did an excellent job porting over the look, the feel, and the puzzle / dungeon design those games are known for. It’s an overlooked gem.

The STRACO series (this game is parts two and three of a trilogy) may not impress you from the start, but its charm and playability wears on you the more you play it. A top-down shooter with heart, humor, and… Optimus Phillip, it’s well worth the look. 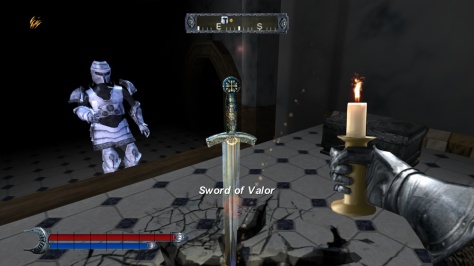 Dead.Kings is a lot like the original BloodyCheckers, which may hurt its originality, but it’s more fun and player trolling per square inch of checkerboard than the now-boring real-life version of the game.

If large breasts and throwing corpses around a stage sounds like an excellent retro-ish platformer to you, then Amazing Princess Sarah is the game for you. This kind of stuff sells itself.

Take the look of Minecraft, add in the survival mechanics and the merciless backstabbing of DayZ, and you’ve got the general idea behind this game. Each match can be a tense affair, a mad dash for limited supplies. Or you can play silly dress up and hide in your private corner of the world. Your choice, no judgement from me.

An impressively-large, post-apocalyptic world full of zombies, the harsh reality of survival, …oh, and the real threat; other asshole humans shooting you in the back and taking all your carefully-scavenged equipment and weapons. Thanks a lot!

A fish with human arms (and giant muscles). A fish with a cigar-smoking problem. A fish with a ten-second attention span. What does that equal? Neon Deity Games’ ridiculously-fun shooter, which tosses new powerups and modifiers your way every ten seconds.

It’s tempting to dismiss XBLIG as a juvenile playground of avatar games, zombie shooters, and Minecraft wannabes, but Survivalist is one of those rare types, the type that sneaks up on you without anyone realizing it. Sure, there’s zombies, but they’re hardly the focus. The game presents you with a huge open world, the onus to survive, and dozens of characters that will remember your actions. One of the best XBLIGs I’ve ever played, Survivalist is a special game.