Time waits for no man, or for XBLIG, for that matter. When I previewed Cromo Dynamix ($1.00) almost a year ago, I thought it held definite promise as an online-focused, twin-stick shooter. Back then, there were still people gravitating towards multiplayer offerings on the service, and the game seemed like a natural fit. A busy schedule and unforeseen circumstances prevented developer ElvishJumpSuit from releasing it sooner, but, as they say, better late than never1.

To a certain degree. Since that initial preview, XBLIG has seen its community shrink with each passing month, and with it, most of those that would even semi-regularly use the online component of any given indie game have departed as well. And as Cromo Dynamix is primarily billed as an online shooter for up to ten players, you’d be hard-pressed to find even one person in the game’s online lobby2.

It’s a hurdle, to be sure, but as recent shooters have shown, if you build it, they may come. Cromo Dynamix concerns an interstellar battle for the fate of the planet, happening right under our noses. You take control of miniature ships, fighting this invasion against enemy drones at a microscopic level3. In reality, it’s just twin-stick ship combat, with powerups thrown in. There’s not much in the way of a heavy tutorial, but you do get a very lengthy intro movie to help explain the story if you’d like (which is ironic, considering the ‘story’ never really shows its face throughout the single-player campaign).

You don’t need much of a primer to get into the fray, however, so that’s less of an problem and more of a dressing to be poured over the simple setup. Fighting takes place over six arenas and with ten different ships, all of which are unlocked as you progress in the single-player (30 missions) and reach certain milestones. The ships are more than a cosmetic choice, as each has their own rating, shields, etc. Powerups too, have an obvious effect on the game and your steed, as missiles and double lasers will swing things in your favor. Hitting the lettered bubbles opposite your team color will boost your weapon power, and function as hazards at higher speeds. 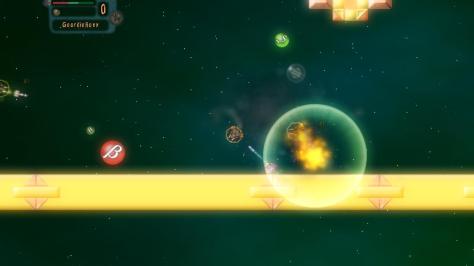 There’s a handful of tricks and strategy to it, but it’s relatively easy to grasp and pick up. Sadly, any depth is lost on the game’s AI. While online battles would certainly play out a little differently, the single-player’s enemies rely on brute strength and numbers to take you out. As later missions increase the odds (and reduce your spare lives in reserve), this becomes more of an issue. Respawns can place you in harm’s way, too, with foes crowding your ship and souring the mood before you have much time to act.

Moreover, there’s a sense of familiarity and nagging repetition to it. There’s nothing in Cromo Dynamix that hasn’t been seen and done elsewhere in twin-stick shooters, and that hurts its bottom line. The game works (mostly) as advertised, but without a community of players to liven things up, the pedestrian design, shooting, and bland powerups all fall flat pretty quickly.