Just when I was in the midst of convincing myself that ‘skin’ games on XBLIG had turned a corner and were approaching something of an acceptable genre (not really, but it sounds better in that phrasing), Date The Boss ($1.00) comes along to reaffirm my disdain for cheap, poorly-executed ‘games’ that last fifteen minutes and prey on the teenage libido. Even calling it a game is being generous, as Date The Boss is a glorfied slot machine.

The gist of it is, you’re a unemployed lad living with an overbearing mother. You’ve managed to snag an interview at a fancy place called Beaumont Industries, and you’re essentially forced out of your home until you’ve gotten the job. Hilariously (the game insists it is, not me) enough, job interviews in Date The Boss go nothing like they do in real life. Given that you’ll be visiting strip clubs in pursuit of this ‘position’, one could argue this path to employment beats any real life job-seeking grind, but I digress.

Date The Boss is a handful of ‘acquire / purchase said item’ missions. Much like in the real world, this requires money, which you earn by gambling at the local casino. Naturally, this is all much duller than it sounds, as it essentially boils down to you continuously pulling the lever of a slot machine to potentially earn bigger paydays. Given the randomness of ‘jackpots’, you’ll probably burn through your winnings just as quickly, turning the game’s ridiculous monetary demands ($500 for a ‘massage’, so I can zoom in on a girl’s ass to read a tattoo with a combination to a safe1, one that will let me rob the innocent gal at the gift shop next door?) into tedious time-wasters. 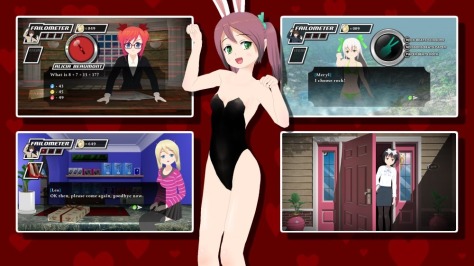 All of this is bookended by the ‘job interview’ itself, an equally-boring general knowledge / esoteric questionnaire to ‘impress’ your potential boss. With the exception of the last question in each sequence, which is timed, you can take as long as you’d like to answer the rest (know some basic math, and keep Google handy). You’re given three chances to pass these ‘tests’, with the punishment being you’ll have to start over from the beginning.

Other than that, there is little else to Date the Boss. You can find random coins in the environment, or play Rock-Paper-Scissors with a bikini-clad girl residing in the lake by your home (which is honestly the best part of this whole travesty). If mindlessly playing the digital slot machines sounds like fun to you, you’re welcome to it. For everyone else— 99% of us, I hope— avoid.

12 thoughts on “REVIEW: Date The Boss”