As the sort-of sequel to surprise hit One Night Two Crazies1, Appease the Spider ($1.00) is a speedy follow-up to the original’s brand of cheap (albeit creepy) jump scares. ‘Speedy’ as in just two weeks ago. I mean, my — ahem, tears from fears— have barely dried on my shirt, and already I’m being asked to do it all over again. 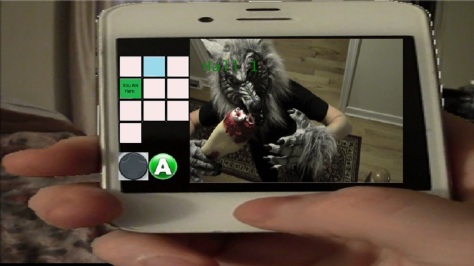 The epitome of ‘low budget’ horror.

Appease the Spider keeps the amateur look and feel, as well as the cheesy dialog and inexpensive props (if it ain’t broke, don’t fix it). Your objective, too, is largely the same: survive the night while intruders roam the halls and rooms of your house. You still keep tabs on said costumed horrors via cameras placed around the home, but the big change to the formula this time around is the ability to manually explore the rooms on foot. Well, with preset movement prompts and button presses, that is.

That travel is necessary, as you’re also on a bit of a fetch quest. As the title implies, you’re not just surviving; you’re fulfilling orders for a very needy (and increasingly-demanding) spider2. With each new night comes a new mission, like retrieving a snack from the kitchen, or bringing back a Chess piece. Later on, you’ll be tasked with gathering multiple items. As you set off on your scavenger hunts, the intruders move about the house, forcing you to keep watch over their movements, …and hope they don’t overlap with yours.

Thankfully, there’s no time limit, and the layout of the house isn’t overly complex3 or massive, but knowing where to look for some of the required items can be. To complicate the search (and dial up the tension), Appease the Spider limits your defenses. You can only hide in pair of places, and there’s no last-ditch move to avoid being caught. Like One Night Two Crazies, you have to constantly be aware of the intruders. And perhaps hope for a little luck. 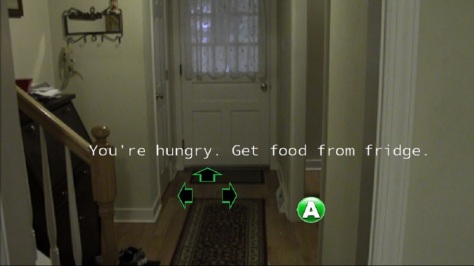 You’ve always got the option to retry, although the inherent trial-and-error of that might turn off some. Even the ‘jump scares’ can get more annoying than unnerving as the retries pile on, and the series’ reliance on pseudo-FMV, still shots, and half-animations (that may cause motion sickness over long periods) means you’ll be staring at the same hallways and death scenes over and over.

There’s no denying that Appease the Spider is very much a one-trick pony, but it’s (once again) timely, and the added mobility and new gameplay elements elevate it a bit beyond what One Night Two Crazies offered. If you didn’t like that one, this game probably won’t convert you. Yet if you’re in the right mindset for cheap scares and even cheaper production values, you can turn off the lights and get a decent amount of enjoyment out of Appease the Spider.

25 thoughts on “REVIEW: Appease the Spider”