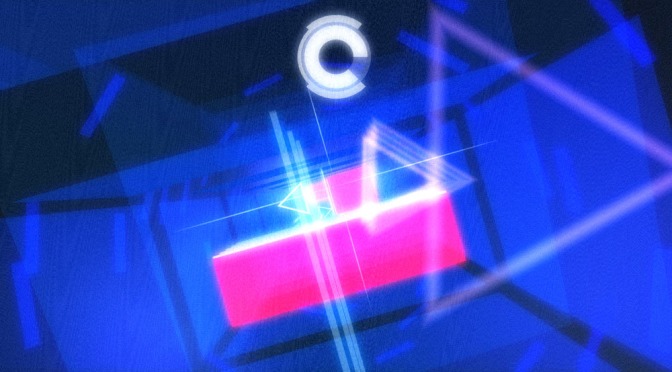 Stuff like hermitgames‘ DELTA1 ($2.99) should really come labeled with a pair of warnings. The first is good news up front; the game is a fully-addictive arcade racer, has that ‘one more try’ quality that plenty of games aspire to but most don’t ultimately achieve. The second is not as good, and potentially hazardous to your health; DELTA is an all-out audio / visual assault on your respective senses. If you’re sensitive to pulsating lights and shapes in the slightest, or get motion sickness easily, it’s probably best to avoid the game entirely rather than take a chance.

Disclaimer aside, the game is a sound-based first-person racer with trippy visuals. That’s just generic phrasing by me. In actuality, DELTA is like someone’s Tron-inspired acid trip through the trench sequence in the original Star Wars, running back to back with the ‘stargate’ sequence in 2001: A Space Odyssey, dipped in a psychedelic rainbow, all while some Daft Punk / Aphex Twin-type music plays in the background2. It’s that busy!

Things move pretty fast, flashing and morphing and spinning as you whiz by, and the somewhat procedurally-generated courses you race on mean you can’t just memorize layouts to win. I say ‘somewhat’, as the tracks in DELTA are comprised of inter-connected ‘rooms’, aligned randomly. While you will eventually adjust to the hazardous walls (one hit = death, natch) and camera style in any given ‘room’, the corridor between can lead into a random layout each time, presenting a new race on each attempt. And you’ll be ‘attempting’ quite a bit; you’ll have to twitch your way through this one, my friend.

You can choose from a total of three race ‘classes’: 120, 144, and 180. Each features its own visual design and music (the soundtrack is slightly interactive, modified with every triangle-shaped ‘delta’ you pick up along the way). While the default race is unlocked from the start, you’ve got to earn access to the latter two ‘tracks’ by reaching a preset distance marker in one continuous run. That total distance is, in essence, your score. Otherwise, it’s a pretty straightforward racer. Your chief objective is to survive and / or reach the end of the stage, with a ‘reward’3 unlocked for completing all three. 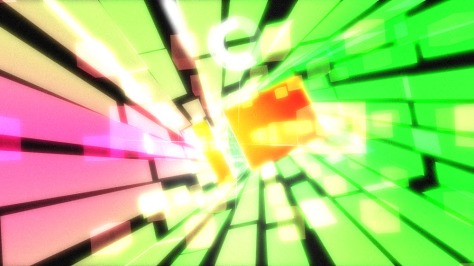 You can almost taste the colors, man.

The game’s excellent and eclectic graphics match the developer’s previous efforts, but those same novel visuals can work against the quickened gameplay in DELTA. Given the shifting nature of the rooms, and the constant pyrotechnics / flashing, it’s super easy to lose track of where you are and what you’re looking at. Throw in an occasionally-spinning camera, and ‘suddenly steering yourself straight into a wall that you quite literally didn’t see coming’ becomes totally plausible. The gameplay, too, can be its own worse enemy, as I literally felt fatigued at playing it for longer than an hour at a time.

That last bit can be mostly chalked up to late nights and eyestrain, though it’s certainly worth the mention, depending on how you plan to play. Consider it a challenge on several levels then, beyond the atypical difficulty of the navigation itself. So long as you don’t stare at your screen for too long, DELTA is plenty tough, and plenty fun.