It’s not the most glamorous job, and the stench has got to be unbelievable, but certainly garbagemen have to be considered among the unsung heroes of the world. They’re not curing diseases or inventing new forms of space travel, sure, but consider this ‘what-if’ for a second; a world without garbagemen. Huh? Huh? Yeah, we’d have a world that looks and smells a whole lot like Delhi. And no offense to India, but that would be bad. Really bad. So that’s why I always give a wave to to those guys when I see them. Partially out of respect, but mostly to clear the air1. 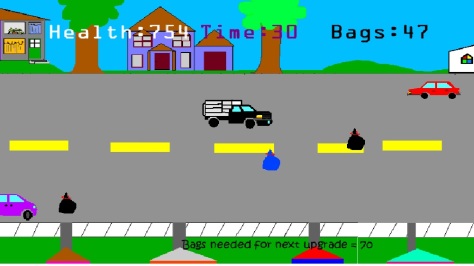 While praise for their contributions is always in short supply, it’s even rarer to see garbagemen represented favorably in the media. Sure, we were blessed with the Charlie Sheen / Emilio Estevez gem Men At Work2, but video games have largely been overlooked. That is, until now.  G-Men ($1.00) makes it possible for everyone to experience the joy and the wonder (and the questionable ‘juices’ that reside in the bottom of the bin) of being a garbage collector.

Sort of. G-Men is more of an MS Paint-style arcade collectathon than a simulator or ‘thank you’ to garbage folk. The game starts you out on foot, walking down the street to pick up bags while avoiding some obstacles and passing motorists. You’re on a time limit, of course, and are tasked with collecting a set number of bags. Meet your quota, and you’re given a pickup truck to haul trash with. The process repeats, adding a few other hazards / enemies, with you eventually building yourself up to a full-fledged garbage truck— the crown jewel of waste management! How exciting! 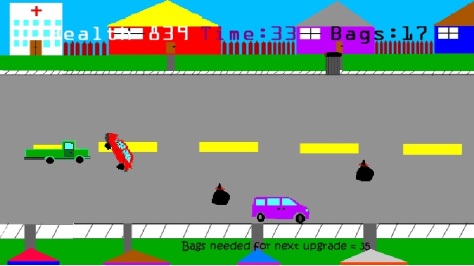 Too bad the game is the digital equivalent of it’s chosen subject; pure trash. The idea behind G-Men is thin, the gameplay even more so, but neither is what condemns the game to be metaphorically dumped in a metaphorical landfill. Rather, it’s the completely ridiculous hit detection. Even when you’re clearly out of the path of an oncoming car or obstacle, you will take damage. On foot, it’s instant death and especially annoying, but even in a truck with semi-limited health, avoiding hits is a matter of luck instead of fair spacing.

As such, the game makes it essentially impossible for you to get anywhere consistently. That glaring fault, taken together with the child-simple visuals and rock bottom basic gameplay, and you’d have to wonder why developer Generation Why Studios3 even bothered to release such an untested, unwarranted mess on the marketplace. I can’t see the reason. G-Men is outright terrible, and should be taken out to the curb and disposed of.

(EDIT 9/1: An update for the game has been released that fixes some of the hit detection problems. While objects that pass over your ‘head’ no longer cause damage, the range of cars / obstacles that run near your ‘feet’ is still ridiculously out of whack.)