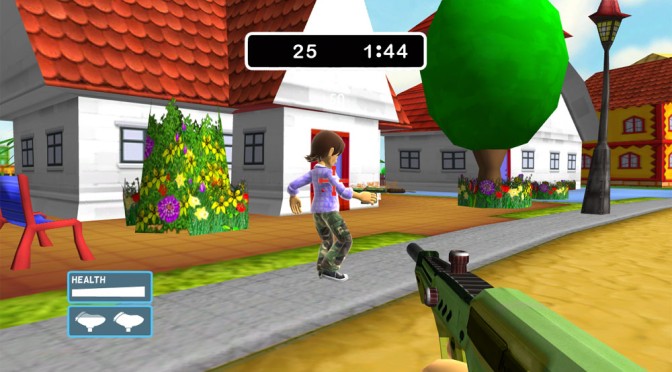 The original Paintball War came out at (what I consider to be) a turning point for first-person shooters on XBLIG, a time of enlightenment when developers really started to hit the mark in terms of control and design. It’s no surprise that the FPS flood doors swung wide open soon after. Almost two years on, we now get a sequel to one of the first FPS1 games I covered. And… very little has changed. Paintball Wars 2 ($1.00) definitely follows the adage ‘If it ain’t broke, why fix it?’, dropping you and up to fifteen others into a colorful (and familiar) online deathmatch, featuring everyone’s favorite non-lethal2 weapon— the paintball gun. 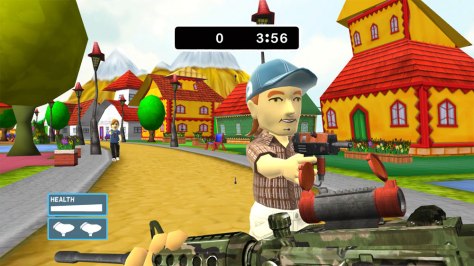 And to be honest, part of me would agree with that adage. Paintball Wars 2 retains the same setup as its predecessor, letting you paint your foes on a single, medium or large-sized (according to player vote) map. The action is fast-paced3 and fun, with constant ‘duels’ springing up, avatars jumping over hedges and / or searching for a moment of respite underneath a bridge. Ammunition is once again strategically-scarce, though refills litter the battlefield. The arena here doesn’t have as much verticality as in the previous game, as the wide open spaces favor confrontation over positioning. If anything, this limits ‘sniping’, forcing players into close quarters.

Similar to the mainstream AAA shooters, the game offers up a ridiculously large slate of unlockables, gained via kills and leveling. You can choose from a number of typical perks and additional weapons, and attachments for said guns. This includes more accurate barrels and scopes, and some superficial customization stuff like gun camo. All in all, you’ll have plenty of rewards to earn in continually playing. Killstreak cards are awarded for successive kills (or can be found in the environment), doling out temporary bonuses like invulnerability or dual wield. 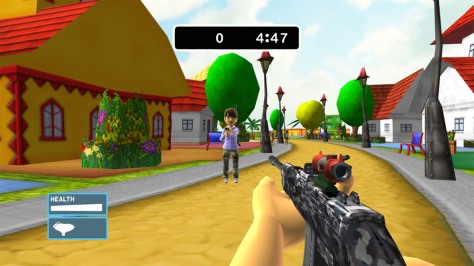 Online play has the usual small hiccups here and there, but the games I found were relatively lag-free… when I found them, that is. The bright side? You aren’t exactly held captive by the whims of the XBLIG community. One of the biggest pluses of this series has been the addition of AI bots4 offline. ‘Single-player’ features its own unlockable ranks and perks, helping to supplement the online half of the game when other players can’t be found. It’s a nice idea to increase its function and longevity.

It’s just all so familiar, with developer Strange Games taking zero risks, nor applying any lessons it might’ve picked up since the original’s release. Granted, it’s not bad if you’re looking for some madcap fun; just don’t expect to be wowed or confronted with anything new. Consider Paintball Wars 2 more of an ‘add-on map’ than a legitimate step forward for the series.