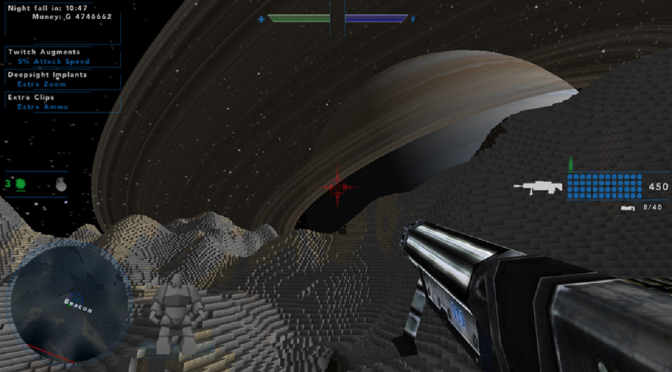 Though some would classify the original Xenominer as a ‘sci-fi Minecraft‘ and nothing more on sight alone, it’s heavy emphasis on survival on a harsh planet made it much more than a simple clone. It’s one of the few games I’ve played on XBLIG where I was actively brainstorming ideas for a potential sequel, so sure of its fun and success. For its second game, developer Gristmill Studios took a step back, to put out a multiplayer FPS set in the same universe. DownGate Deathmatch tried, but it was not a very good game. Now, the team is back with another attempt, hoping to expand the universe yet again.

Enter Xenominer Swarm ($1.00), which keeps a lot of the same gameplay systems and options from DownGate Deathmatch intact, and seems no less ambitious. The big change to the format this time around is the game is now a four-player cooperative FPS, having you battle aliens in a semi-wave format across a variety of modes and maps. You essentially play as a mercenary for hire, completing contracts to earn enough money to buy new weapons / gear, and unlock access to additional planets and missions, with the difficulty and rewards scaling upwards accordingly.

Mission types include ‘Mining Contract’, which sees engineers digging for minerals / crafting supply crates to send back home, a self-explanatory ‘Base Defense’1 setting, and a kill-everything mode called ‘Bug Hunt’. Regardless of the blocky planet, the contracts typically have you guarding a ‘base’, which serves as your spawn point and shipping station. You can swap characters here, and place assembled crates to be beamed off-world.

The class-based solider system returns as well, with the standard ‘Marine’, the workhorse ‘Engineer’2, and the sniper-ready ‘Recon’ types. While the first and last units haven’t changed greatly, the always-vital engineer class has been given an armament upgrade, allowing you to craft defensive turrets and guns to guard your base / fellow marines. All of the classes come with numerous ways to customize your ‘ExoDrone’, changing armor / helmet types, weapons, ammo types, and even a handful of perks. 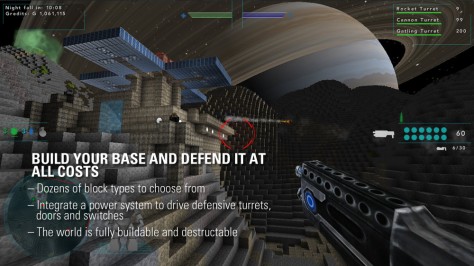 In theory, this range of options and the mission variety should equate to an evolving, entertaining game. It doesn’t quite get there, though, for the same reasons that DownGate Deathmatch failed to deliver on its grand promise; all the parts are here, but everything lacks punch and a sense of urgency. The so-so online play doesn’t help (there were a few framerate stutters I noticed, and I was dropped from some matches), and it still has the clunky, unsatisfying combat that can be found in the previous game. Ammo, too, is once again sparse, forcing you to rely on engineer teammates to re-up, or expend energy to slowly regenerate bullets. Neither option suits the quicker style of game the developer is going for.

The result is another uneven experience. In a lot of ways, Xenominer Swarm remains ahead of its time on XBLIG, granting you an awesome amount of content and adaptable gameplay, all for a single dollar. Despite the ideas and that freedom, it remains tied down by underwhelming combat, some initial confusion as to how it all works, and a snail’s pace in terms of progress and gameplay. It’s still worth a look, especially if you have three friends to play with, but I sincerely hope that Gristmill can work out the kinks in this side series. It really could be something great.