The game of Checkers1 is an old one, possibly the oldest. It’s rules are relatively simple; two sides, two sets. Men can make diagonal moves on the board, only going forward, while King pieces—having reached the other side of the board unscathed— have the luxury of moving diagonally in either direction. The idea is to ‘trap’ and / or ‘capture’ all of your foe’s pieces. There are good moves and bad moves2, and a fair amount of strategy involved, but generally, anyone can jump right in and play.

Ditto for DeadKings3 ($1.00), although in many ways, Checkers isn’t the game’s primary focus. As the sequel to a fan-favorite game called, appropriately enough, BloodyCheckers4, you’d kinda expect it to be. I mean, you’ll play plenty of rounds of Checkers, against the AI and / or human players. All of the parts and rule sets are there, mind you, and some not-so-official powerups, but DeadKings is also all at once a dungeon crawler, an RPG, part roguelike, and even a co-op adventure game, if you prefer to play nice with others. 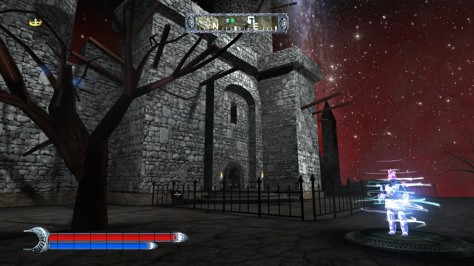 To that end, you are a reincarnated knight, brought back to the entrance of a vast, extremely hazardous, and unmapped castle. Your ‘goal’ as stated is to ascend the floors of said castle, finding ways around locked doors and gates, triggering a number of devious traps and enemies, and challenging dozens of opponents (including Death Himself) to a very impolite game of Checkers5. All of this, in order to eventually level up your knight and reach max level, to open every door, and to claim the Sword of Valor for your own.

Easier said than done, natch. Though really, it’s not the ‘games’ you should be worried about. The castle itself is the real challenge, practically a living, breathing character, providing multiple ways for you to die and get lost in its labyrinthian corridors. That said, you can also thrive, once you’ve built up a small treasury of gold and earned a few abilities / items. From there (and once you’ve gained the ability to warp around the map), it’s essentially an open world. Do as you wish. Uncover some secrets, burn some bats, or troll your co-op partner and teleport him to the pits of the castle6.

Whatever happens, it’s important to keep your light handy. As in the original game, your candle is basically life itself. Should your flame be snuffed out, you are in a world of trouble. Besides the obvious result of being left in the dark, you cannot open chests, doors, or enter paintings (how you start Checkers matches, buy certain powerups, etc.) without it. Later in the game, this is potentially less of an issue, but in the early going, you’ll have to be on guard.

Given that mechanic, the maze-like floors, and the shifting nature of its hazards (DeadKings has its own version of Lost‘s Smoke Monster), the sheer scope of the castle can sometimes be intimidating. The game is built with co-op in mind, which should cut down on any frustrations you may have. Although, as is the case with other games this size, a few bugs still exist in the current form. Fixes are inbound, but none really detract from the overall experience.

Thankfully, the game keeps you too busy and too entertained to notice. Play some Checkers (or don’t), solve the castle’s various mysteries, adventure with— or against— a friend, and, perhaps most importantly, continue to explore. Even then, you’ll likely never run out of things to do. After five-plus hours, I’ve only scratched its surface7. And that’s a very good thing. However you choose to play, and whatever endeavor you wish to focus on, DeadKings— and its expansive castle— gives you plenty of excellent options.