SuperCollider ($1.00) seems like the end result of a feverish Red Bull1 weekend and a marathon session spent in Microsoft Paint. Between the ‘loud’ backgrounds and the cringe-worthy visual style, I can’t think of any other explanation. It would certainly explain the attention given to the design and gameplay (or lack thereof), which feels ‘rushed’ and without any kind of iterative refinement. 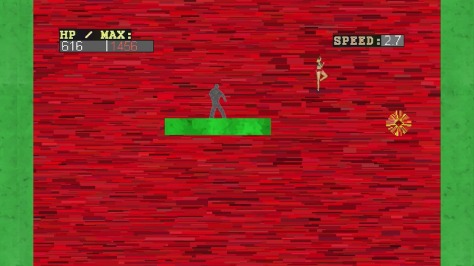 A platformer that plays more like a timed race, SuperCollider stars a nameless female science experiment gone wrong / right, on the run from the spelling-challenged crew of G-Tonw.  Each level starts with ‘Here, have a plot sequence’, some swearing and / or misogynistic banter, and then its off to races, fighting (if you consider ‘running into’ enemies to equal combat) featureless, grayed-out foot soliders and other assorted baddies, in a mad rush— er, brisk walk, I mean— to reach the exit before your declining health reaches zero.

Your HP functions as the vital ‘seconds’ ticking off the clock as you go, with the levels gradually becoming longer and more maze-like. You can earn a scant amount of health back by defeating foes, but the real key to finishing subsequent stages is in acquiring permanent boosts to your HP and / or running speed, via powerups peppered throughout the maps. It’s not a bad system, in terms of ‘Risk vs. Reward’ for the player to weigh out, but it’s implemented piss-poor.

Don’t ask the how or why a shark is shooting out of a solid floor. Best not to dwell on such things.

Most of the upgrades are placed in out-of-the-way nooks, the path not always immediately clear or certain at first glance. A few of them might even be considered ‘trolls’, egging you on to reach them, only for you to discover— after the fact, natch— that you won’t have enough time to reach the exit. And with no checkpoints or continues to erase a fatal mistake, you really won’t want to sit through the terrible writing or mosey through the same stages again.

Nor should you. What potential the game has to entertain is wasted on bland visuals, even blander storytelling, and gameplay that punishes more than it enables. Despite the urgency the game goes to great lengths to stress, SuperCollider is ultimately just like its enemies— featureless and dull.