Although the Roman numeral in Servo Series I: Overclockers ($2.99) would seem to indicate this is the first game in a series of open world, bot-on-bot first person shooters, it’s not. Well, not really. It’s markings match that of a game that blasted its way out of late 2012, calling itself Project Crossover. That one had potential, potential that was squandered by boring fetch quests and massive amounts of walking. Or  hovering. Whatever. A lot of something that wasn’t fun.

Some quick research showed that Stamper Games was behind that former attempt, and really, once everything’s been tallied up and been given a once-through, this new game is a slightly better-looking version of the first. Oh, and that bit about ‘potential being squandered’, and ‘boring fetch quests’? There’s a lot of that present in Servo Series I too.

Swapping out rebellion and evil corporations for a secretive sect of robots addicted to high clock speeds (it’s as tech-focused and uninteresting as it sounds), the game once again has you— a robot with unorthodox programming and exceptional traits— traveling a foggy landscape, completing quests for various friends and factions (the slow, thickly-robotic voice work returns) in towns scattered across the wasteland. Taking on these missions typically advances the narrative and grants you experience, which can then be applied to different health and weapon upgrades upon leveling up.

Getting from one place to the next is now much easier (and less busywork), thanks to Fast Travel hubs found in towns and the No Man’s Land between them. Transportation conveniences aside, you’d still do well to make the journey yourself, in order to earn additional experience and loot fallen enemies (you can carry as much ill-gotten hardware as you want, then sell off duplicates). Cash can then be spent at vending machines, which house new weapons and improved versions of existing types, as well as armor and shields.

Ammo is slightly scarce this time around, perhaps to add challenge, or to focus on the importance of the new melee system and your bot’s ability to block incoming projectiles / attacks. It’s a nice thought, but most fights can be won simply by waiting for your enemies to exhaust all of their ammo before pouncing. And although tracking enemies in open ground can be hard, you can always just wait for a bot’s zippy one-liner to carry through the fog, often proclaiming their superiority to you… right as you kill them. Good stuff. 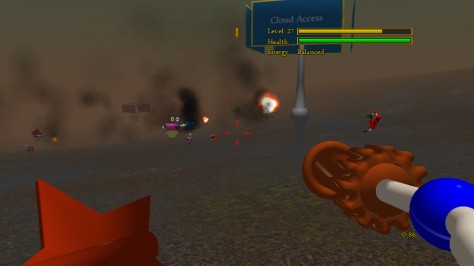 Unfortunately, for every old problem that’s sorta-fixed, Servo Series I adds a new one to the roster, such as a user-unfriendly inventory system and the inability to hurry conversations along without skipping the entire message. There’s some balance issues as well, as enemies can be unfair the deeper you travel in the game (I got one-shotted a few times, even at higher player levels), leading to restarts (argh! those long loading times!) and inevitable frustration.

Most of all, Servo Series I: Overclockers is just not very fun to play, the same verdict that I leveled at the original game. It’s improved in certain areas, but the most vital aspects in designing an entertaining game have been ignored. The plodding, ‘Point A to Point B’ mission structure and bland combat do nothing to accentuate an already-dull storyline, and the sudden spikes in difficulty will likely finish off what’s left of your patience. As such, there’s absolutely nothing here that requires your interest or involvement.