I’m not a indie game developer (of course), or even a partial expert on the craft. I try not to pretend to be, either. Though I imagine if I were, my first prototype for a twin-stick shooter would look and play a lot like Tapper ($1.00). Notice I said ‘prototype’ in that previous sentence, and not ‘the final product’ I planned on releasing. 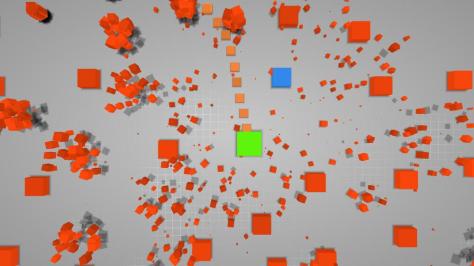 The reasons against releasing it would be partially cosmetic. My game is nothing but a series of squares. I know I’m not making Thomas Was Alone: Shooter Edition, and that my square art isn’t intended to be ‘art’. That is to say that it’s not a stylistic choice, or meant to evoke an emotional response. They’d simply look and feel like placeholders for actual art that didn’t happen, and that wouldn’t be right.

Gameplay too, would be a sticking point. Sure, I’ve got an able, functioning twin-stick shooter framework. It’s a simple game of survival, one life to live. I’ve got my hero ‘green square’, facing off against an unending army of ‘red squares’, Green Party versus the Communist Party, maybe, or just a bunch of squares going at it, to simplify. Some blue squares too, acting as mobile bombs, which I can then detonate at key moments (typically, surrounded by red squares in a no-win situation). It’s okay, but hardly something I’d be impressed by for more than a few minutes.

I could try to disguise that fatal lack of depth a bit, say, with a online leaderboard, or some additional modes or mechanics. But I don’t. I do, however, include the option to zoom out or in, making the squares and the battlefield bigger or smaller, depending on player taste. It doesn’t really add anything to an already bare-bones roster of gameplay components, though, so I’d feel guilty asking money for it.

Thankfully, I don’t have to feel that guilt or question my product’s worth on the marketplace, because I’m not an indie game developer. Zyborg Mobile Ltd. is, and Tapper is entirely his game. I want both you and him to know that the above sarcasm isn’t my attempt at a lame joke or a putdown, either, I’m just wondering who the prospective audience for something this basic would be.

It’s the studio’s first title on Xbox (he’s primarily a mobile developer), but he’s hardly a stranger to more complex game design. I was pleasantly-surprised to find out that Those Who Survive, an intense-playing Minecraft / Slender mash-up, was done by the same guy. That’s absolutely a game worth downloading, while Tapper should have been left on the cutting room floor.