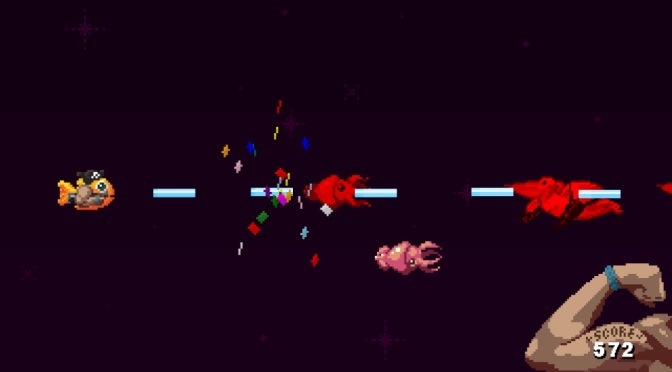 When your hero is a cigar-smoking fish with human arms and the muscles to back it up, you just know a game like Shutshimi ($1.00) is going to come after you. If Super Amazing Wagon Adventure was the modern day, hyperventilating re-telling of the Oregon Trail, then Shutshimi is the shooter equivalent of a game jacked up on steroids (come on, you know that fish is juicing), humor, and TL;DR gameplay.

Like SAWA before it, Shutshimi specializes in sample-sized servings of kinetic gameplay, served up in randomized and disparate pieces that somehow manage to form a coherent package. You’re never in the clear or in total control of your fate. Just as you settle into one style or type of weapon, the round is over and the game forces you to switch up your approach and tactics.

Everything in the the game happens in ten-second increments, and it’s more than just a unique hook or bullet point for the back of the game box. Here, that caveat makes perfect sense, stemming from the long-held belief that goldfish only had a few precious seconds of memory (they don’t; in fact, they’re quite clever). Truth be damned, though, if it makes for quick, intense firefights.

Waves end whether you shoot or kill anything, followed up by a ‘shop’ round, where you must choose from a trio of temporary powerups or powerdowns. This can range from a new weapon (shotgun, lasers, etc.), defensive items (fishbowls are life in Shutshimi, saving you from certain death) or…. er… party mode (lots of flashing lights). Either way, it doesn’t come easy, as each effect is hidden somewhere in the often-humorous description. This too, is made all the more thrilling by the short time allowed to select. ‘Read fast and choose wisely’ is the best advice. 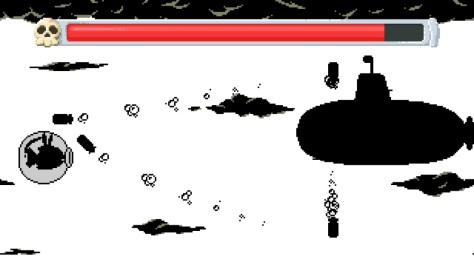 Even with the constantly-changing modifiers and loadouts, the emphasis is always on shooting and keeping the challenge dialed up. Boss fights provide that test, multi-round affairs that see you whittling away their health over a series of waves (or in one go, if you’re awesome like that), broken up by regular rounds / shop visits. The game’s difficulty options are tiered, allowing you extra lives to get your feet wet (…get it?), before throwing you into the deep end of the pool (…get it?) on the higher settings and tougher fights.

Playing on medium difficulty and above (‘Heartless’ is truly heartless), the game tracks your scoring records and saves progress towards a number of awardments and unlockables. You can don a number of fancy hats that give your fish a certain style, or open up a few other extras if you’re sufficiently skilled (….I …I am not).

That doesn’t change the fact that Shutshimi is one seriously badass fish. Sure, it’s random and all over the place, but that’s exactly what makes it fun and worthy of your time. No two gameplay sessions ever play the same. It takes a risk in throwing the ordinary shooter conventions aside, ultimately relying on its charming, schizophrenic style and challenging gameplay to win you over. And it does. This fish comes highly recommended.1