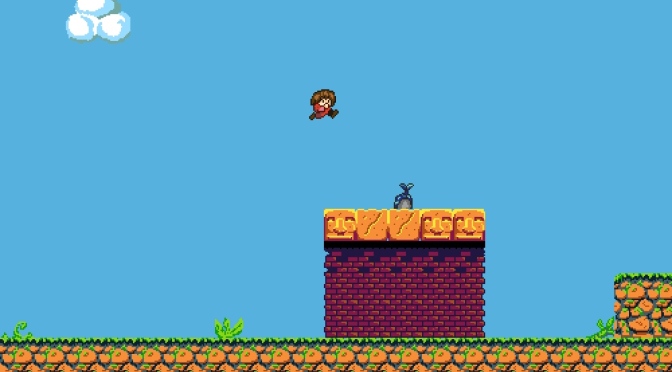 Not to be confused with significantly-expired bacon that should be discarded (you know who you are), Blue Beacon ($1.00) should be a familiar romp for most: Mario‘s bread and butter platforming and mechanics, paired with sort of-Adventure Island‘s graphics. Actually, it’s ‘sort of’ on both counts, as though it borrows from popular and not-so popular titles alike, it doesn’t quite match up to them in its execution.

First, the setup. Our protagonist Sasha is on a mission to save the world. To do so, you’ll need to collect three ‘Discs of Power’, with each found at the end of a string of levels. That will entail the requisite running and jumping, plucking impossibly-suspended items in the sky, and using your head to bust through bricks to find crystals instead of coins (collecting 100 will earn you an extra life, of course).

Even the enemy foot soldiers are comfortable stand-ins / cheap knockoffs for the ‘goombas’ and hard-shelled ‘koopas’ from Mario‘s universe; you can stomp on one, and send the other careening into his friends for a tidy point combo. Taking on the abilities of animals (or insects, in this case) via powerups is also on loan from the plumber, granting you the innate skills of that particular bug. The Beetle suit allows you to burrow through enemies and bricks, accessing secret crystal caches, while the Butterfly and Grasshopper variants give you additional traversal options (flying short distances and jumping higher, respectively).

The suits are presented in sequence, with the levels generally well-designed to accentuating their strengths… and showcasing the game’s very slippery controls. Take note: Sasha will walk on a good four or five steps after you let go of the stick. Not the responsiveness you need in a platformer. If nothing else, the suits will come in handy as ‘extra health’, as taking damage from unintended mistakes will only return Sasha to default form, with the next hit proving fatal. 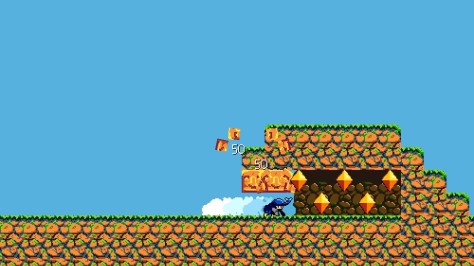 In that regard, Blue Beacon also goes a bit old school with its difficulty, giving you a limited number of lives to reach the end, with no continues or checkpoints for good behavior. The aforementioned crystal-collection is thus made all the more important, as is careful maneuvering and patience / restraint with the controls.

The end result is a short, potentially-frustrating, and pretty generic platformer; acceptable if you like those kinds of things, though it’s a pale copy when compared to its chief inspiration. Blue Beacon‘s challenge and hook of using ability suits might hold your interest at first, but if its parts don’t add up to much original fun in total, what’s the point of taking a sub-par journey? Play Mario instead.