Poor Quinbu (the robot-person). He gets himself his own game, Quinbu ($1.00), which is kinda cool, but with self-titled games comes great responsibility. Not only does the chap potentially inherit an entire race to rule over, one that happens to be at perpetual war with an evil rival race, but he also has to live up to the mighty legacy of his father before him. 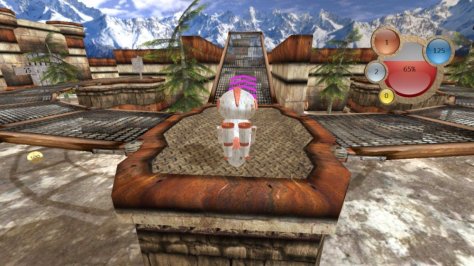 Of course, the bar for becoming leader of this civilization isn’t set too high. Quinbu has no arms and no legs (he’s like a rocket with impeccable balance), so basically, any old human with full-on appendages could step up and ‘Fight Club’ their way to clan leadership. Not that this group believes in that sort of thing. A fierce warrior has no place here. You see, in order for Quinbu to ascend to the throne and become the leader his robot-people hope he can be, he needs to do something far more challenging, far more inspiring… He needs to collect loose change.

To test his skills, various arenas full of coins and ramps have been set up on the planet, with locked gates requiring a certain amount of currency to be deposited before you can proceed. There is some strategy involved in the fetching, as Quinbu’s fuel can only carry him so far before stalling out. Stages naturally have a limited amount of refuel containers, forcing you to chart the most economical path to victory. To help, a trio of camera angles allows you to spot the tinier nooks and hidden coin caches (most of which you’ll need).

‘Cash rules everything around me.’

Quinbu isn’t the most agile or graceful fellow, though, sliding to a stop and turning like a stiffened tank. Later levels (twelve in all) mix in boost ramps and walled-off rooms, adding to the trouble of traversal; you’ll have to be lined up just right in some instances. And as a sort of side  objective, there’s a hidden part for Quinbu’s ship in each stage that must be collected. In doing so, he can presumably rebuild his ride and escape this world of floating money posthaste.

Unfortunately, the idea and its minimal tricks lose their appeal just as fast, and Quinbu‘s slick controls (the slippery kind, not the ‘implication of cool’ kind) and shallow pursuits don’t hold up over the length of a full game. I feel bad the little dude has a full plate to deal with, but never has becoming a leader been so… meh, so boring.