It’s not the first, and it certainly won’t be the last. With Bot Stoppers ($1.00), developer Pow Studios has created what, in a lot of ways, is the calling card of indie development. An established genre or idea, on a smaller scale (but with a few twists), that’s been given enough attention and layers of paint on its surface for all to see that, clearly, the developers are passionate about the project. Ditto for the outcome, which sees those very good intentions lead to somewhat uneven results.

The game itself is a robotic beat ’em up, familiar to anyone that’s played a side-scrolling brawler from the late-80s onward. I only reference that because the formula hasn’t changed much since then. Bad guys playing the evil ‘Yang’ to your badass ‘Yin’ mosey onto the screen, you pummel them, you advance to the right and repeat as needed. This isn’t a criticism, either, just how it’s sort of always been done. It’s left up to developers to make that idea intriguing over the length of the game.

And Pow Studios does an admirable job there. Between turning your enemies into rusting scrap heaps using a shit-ton (note: not an actual term for gauging weight or quantity) of punches and short combos, it injects some RPG-like progression into the mix, giving you a choice between a pair of unique upgrades at preset stopping points within the levels. These can vary from the offensive (a screen-wide shockwave, for instance) to the more defensive (a healing move based on the number of foes you tag).

All of these skills cost energy, natch, which regenerates over time and can also be upgraded with points earned during your dueling. Along with the usual staples of increased health and damage, the game gives you ample control over your character’s build and how he evolves. Though the most endearing part of Bot Stoppers is its animation and art, with the combined visuals taking on a sort of ‘Saturday Morning Cartoon’ style that exudes a certain undeniable charm. If only that charm could distract you from its other shortcomings. 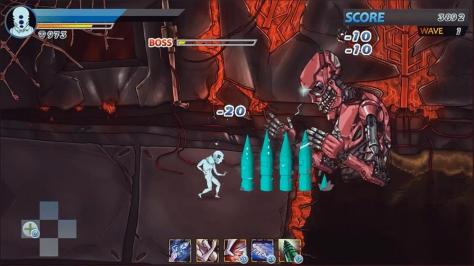 The Terminator makes a cameo.

While the controls are otherwise adequate, their responsiveness feels a little off, making it harder to counter attacks with any consistency. Given that enemies can effectively gang up on you and damage you mid-animation, blocking sort of feels moot anyway. During busier scenes, with foes capable of temporarily ‘stunning’ you in place, you might as well button-mash and hope for the best. It’s also a shorter journey than you might expect. The game features only two extended levels, which adds up to about forty minutes, give or take.

You could always play through it again, to choose the opposite upgrade powers and test them out, but that’s not much incentive when the battles inherently get repetitive. That leaves Bot Stoppers stranded somewhere in the middle, an interesting design that feels light in comparison to other brawlers. Fun while it lasts, a very nice-looking but sample-sized serving that could have done better as part of a larger experience.