Ten minutes into Shipwreck ($1.00), right in the middle of the first dungeon that plays like a tutorial, and you’ll be saying ‘Man, the Zelda is strong with this one.’ This is more than just a cheap opening statement. Other indies, like EvilQuest, have nailed the visuals and basic presentation just as well, but Shipwreck is the first I’ve played to genuinely feel like it could be a true game from the series it adores.

The plot, too, smacks of something familiar. Your ship is disintegrated in a sudden and mysterious storm, leaving you marooned on an island that won’t let you leave. Very Lost-esque, in that regard, or, in fact, similar to the storyline of Link’s Awakening. Much the same as that title put Link on an island and ditched the once-staple Zelda words and characters (no Triforce, no true Ganon), so too does Shipwreck craftily re-label the familiar (gold coins replace rupees, apples over hearts, etc.).

Not that the game shies away from the correlations. This is a respectful homage, but one that veers dangerously-close to ‘clone’ (because it’s so good) in certain instances. Luckily for developer Brushfire Games, the entire game is fantastically done, so you won’t much care or assign any blame. Gameplay is thus equally fluent. The protagonist is given a sword to start, and you acquire a shield soon after. You can equip two items at once, and the toolset you’ll accumulate over the course of the journey is old hat to any Hyrulean superfan (crossbow, lantern). So far, so Link.

The overworld of this island is beautiful, but smaller in size and not as thrilling. You have the requisite chatty villagers, homes to rummage through, and a mayor asking you to rid the land of a vengeful ghost (the cause of said storms), collect the four elemental seals, so on and so forth. Other than the town proper, where you can stay at the inn to heal your wounds or purchase portable recovery items (this will be necessary) the overworld is mostly used as a walkabout to separate you from the meat of the game— its excellent dungeons. 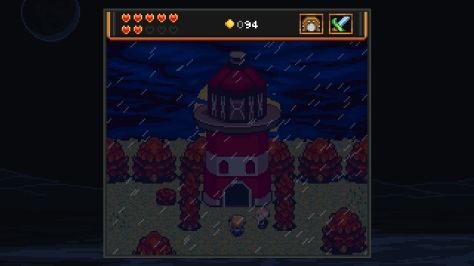 ‘Go ahead and get inside the creepy lighthouse, kid. I’ll stand guard out here.’

So much so, that you won’t mind some of the ho-hum boss fights, or lament the absence of an overworld map, or better tracking of locked doors and objectives in the dungeons (some confusing moments, but it’s all minor stuff, I promise you). Counting the extended tutorial and the final showdown at the lighthouse, it makes for six unique dungeons in all. That’ll equate to about three and a half hours of adventuring for most, and if you’re like me, you’ll wish it went on for longer.

Which is the very thing you want to hear about a game and its overall level of satisfaction. Everything in Shipwreck looks, feels, and sounds (Catchy soundtrack? Check!) authentic, and the love it shows towards the source material is evident. So lap it up, ladies and gents. This is probably the closest we’ll ever get to a Legend of Zelda game on Xbox, and I can’t imagine it being any better than this.