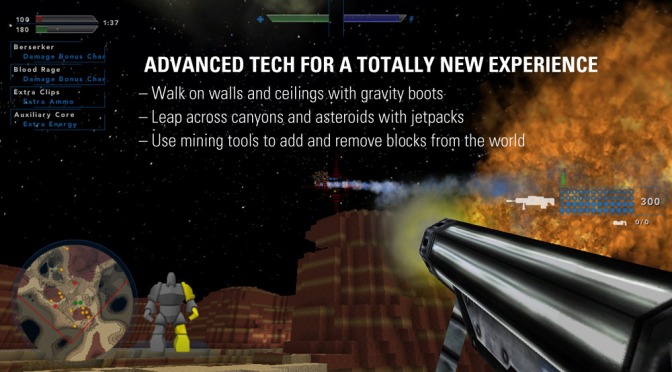 One of the better games to come out of the last Indie Uprising was XenoMiner. Undoubtedly, new takes on Minecraft have been done to death, but in giving the game an extraterrestrial base and a heavy survival aspect, it managed to eek out a niche. Though it was successful on its own, and plenty of updates / add-ons have been released, developer Gristmill Studios is taking a stab at something different for its latest, DownGate Deathmatch ($1.00).

And what better way to broaden your audience (and earn a little extra revenue) than with a first-person shooter set in that same universe, right? Right? Well, that is the plan. You see, combining FPS and Crafting is old hat, too, leaving DownGate Deathmatch in the precarious position of having to prove itself equal to (or better than) existing examples, or risk looking like a cheap, me-too knock-off.

Taking stylistic inspiration from classic run-and-gun types like Unreal and Quake, the game certainly doesn’t want for options, granting you complete customization over your choice of ExoDrone (that’s fancyspeak for ‘Space Marine’). You really can be a beautiful, unique snowflake in space. From class designation to outer appearance, to weapons, equipment, perks, and even ammo type, the total number of possible outfit combinations is impressive.

Ditto for the traversal options once you’re in-game. DGD supports up to sixteen players online, and the maps are at once intimidatingly-large and expansive enough to accommodate the number of players. You can remove and / or add blocks to create defenses. Jet-packs can get you both vertical and around the level in a hurry, while gravity boots can literally change your perspective of the world on the fly, with the floor becoming the ceiling and vice-versa. All of which introduces several different ways to play.

…but not the first-person shooter you need.

Unfortunately, all the front-end work and thrilling bits sound better on paper. In practice, it plays average at best, with the crafting and gravity features reduced to novelty tricks. Combat lacks oomph!, and hit detection is non-existent, making it impossible to tell if you’re doing damage to other players. When you can find them, that is. The transient nature of online lobbies means you likely won’t find more than two or three players at a time (thus making the maps too big), while the terrible single-player AI guarantees you won’t have much fun solo either.

If you could judge a game purely by its possibilities and eagerness to please, DownGate Deathmatch would rank highly. To do so would be ignoring some pretty serious faults, though, and the fact that the game simply pales in comparison to other titles like it. It looks the part, but feels like a clunky, bland-playing FPS that does little to help or expand the universe it is set in.