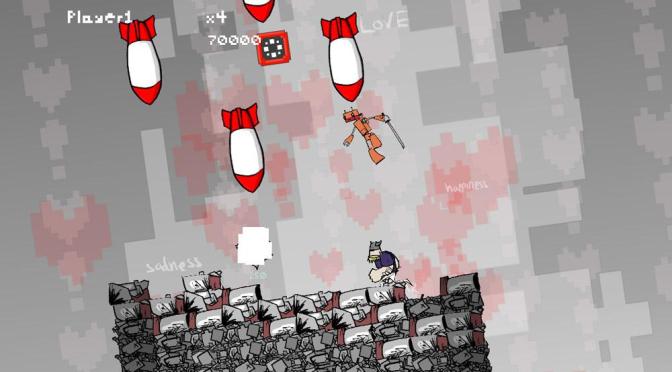 Whoa! TIME VIKING!!!!!ANDSPACERAPTOR ($1.00)! With five(!) exclamation points! Whew! It was terribly important I get that right at the start, as I’m going to abbreviate it the rest of the way. Once the exclusive bragging rights of those with a Windows Phone and ownership of Ska Studios‘ previous I MAED A GAM3 W1TH Z0MB1ES 1N IT!!1, TV!&SR is now available as a standalone game on the Xbox.

If you’ve played any or all of Ska Studios’ previous releases on XBLIG or XBLA, you should know what to expect. Uniquely-recognizable art and style, an audio / visual bombardment of your oculars and earholes, with frenetic gameplay once again driven by music. Serving as a sort-of / spiritual successor to IMAGWZII, TV!&SR is a vertically-scrolling twin-stick shooter that stars a time-traveling viking shooting bolts of lightning with his mind, on a quest to crack open the moon, piñata-style, and collect all the shiny gold coins contained within.

To reach the heavens and claim said reward, our horned friend will have to build a morbid tower, stacking the bodies of his foes underneath him. Those enemies include a limitless robot army, Space Invaders, and… cats (Not the kittehs! Why!?!), spawning in step with the soundtrack. As the music escalates or slows to a softer level, so too do the waves of enemies. The backgrounds adjust to the theme as well, signaling a reprieve from the faster combat and adding some visual variety. 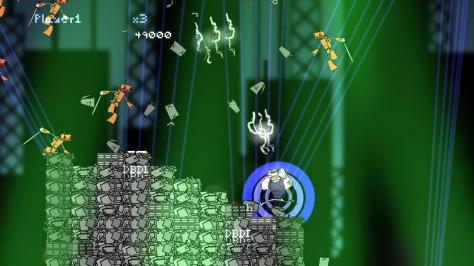 New to this edition of the game, besides the obvious graphical upgrades and physical controller support, is a second playable character for the local co-op— a Space Raptor that spits acid, which makes for a very effective armament (we all remember what happened to Seinfeld‘s ‘Newman’ in Jurassic Park).

Though the game’s not overly-challenging or long (20+ minutes), powerups and extra lives are dropped from defeated enemies, switching up your attack style for a limited time and negating some of your potential mistakes. After robbing the moon and recording your highscore, though, it’s over. It’s a fun shooter, and certainly one of the more bizarre premises you’ll come across. It’s just not very lengthy, a side effect of being an add-on to a fuller game, maybe, but TV!&SR‘s pedigree and overall solid construction gives you enough reason to give it a go.