Weighing in at just over forty pounds of quirkiness and furriness, FarmFury! ($1.00) finally answers the burning question of what people in the ‘old days’ did to settle farmland disputes. If you thought they dressed up as animals and then threw mice and cows at each other, all Tower Defense-like, until only one man-imal’s farmhouse was left standing, you would be one hell of a disturbed chap, and you’d be correct.

The game’s anime-style characters are merely window dressing to be pitted against each other, as there is no overall plot or story to follow. Whether or not you’d actually want to learn the backstory of someone named ‘Froggy’, obviously dressed in a frog costume, is a matter of preference (…I kinda would), though the lack of any overarching cohesion between the combatants, or why they’re fighting, means all you’re left with is the Tower Defense part.

And that aspect is rather plain and undercooked. TD games are known for their overly-complex setup and steep learning curve, sometimes dumping obscene amounts of knowledge and rock / paper / scissors formulas onto your plate, then trusting you to sort it all out. FarmFury! is the exception to that rule, giving you only two units, mice and cows, to play both offense and defense with. 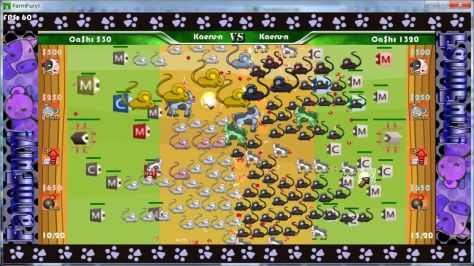 As you’d expect, the mice multiply more quickly, whereas the cows are slower to spawn, but pack a bigger punch. Both units can be upgraded a handful of times, and, in a novel approach, everything is bought with the ‘gore’ you and your opponent vacuum(!) up. Yes, finally, we have an in-game economy funded entirely by the viscera of dead animals you Hoover-suck off the battlefield! This injects a little extra strategy, as well, since you’ll need to be proactive to earn cash. It can also turn the tables in a match, as a losing opponent will obviously have much more ‘gore’ on their side of the field to build with.

Unfortunately, all the blood and guts and cat-eared ladies in the world can’t be a substitute for shallow gameplay. Each character carries his or her own ‘special move’, such as the ability to heal units or slow down the unit production of an opponent, but it’s just not enough to maintain a lasting interest when so little differs from match to match. The novelty fades quickly, as once you’ve sparred with the AI or against a friend locally, you’ve seen all there is to FarmFury!