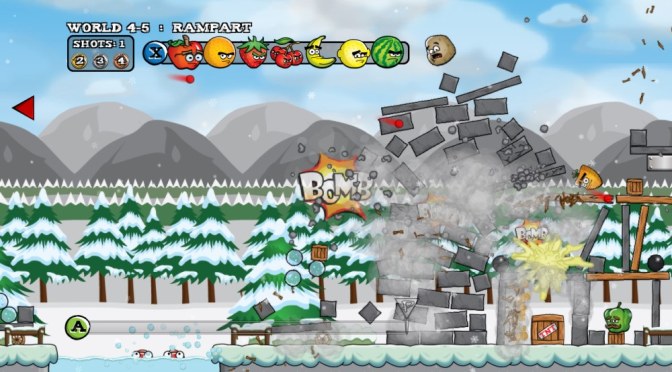 Produce Wars ($1.00) is out, having been circling the runway of release for some time (I remember hearing about it early in 2012). Back then, and even now, your first inclination would be to label it ‘Angry Birds with Fruits & Vegetables’, a cash-in for those that don’t care about playing derivatives. I expected it to play out as such. To an extent, it does, though it also combines other platforming elements in an attempt to stand on its own. The long development cycle has paid off.

To get it out of the way early, huge portions of Produce Wars will… ahem, produce, the requisite déjà vu. For all its creators’ insistence on being an ‘evolution’ of the genre, Produce Wars is indeed Angry Birds with a different cast of characters, right down to the multiple fruit types that offer unique shot abilities, and the standard ‘seige’ levels you’ll have to dismantle piece by piece, timmmberring! the towers to skillfully chain the demolition. Though the stages are very well-designed and fun, meant to be replayed, their inspiration is always readily apparent.

Perhaps to dilute the similarities, and to provide more variety, the game mixes these familiar stage types with some larger, multi-part levels that depend more on timing and skill. Rather than just collapsing the defenses from a stationary turret, you take on a more active role, traversing the levels yourself. This is handled by lining up barrels and timing your shots, a la Donkey Kong Country, in order to reach better angles or activate switches for targeting any isolated vegetable antagonists. This new mechanic comes with its own set of challenges, too, such as barrels that countdown to an automatic launch, or level-specific hazards like buzz saws and avian shot-blockers.

In typical fashion, the stages end once you’ve eliminated all enemies, preferably in the fewest shots possible. Progress is based on increasing your skill; to open up the next set of levels, you’ll need to earn at least a bronze on four of the five that preceded them. For you compulsive types, collecting the star in each level (some will have to be revisited once you gain new shot powers) will build towards unlocking special (and optional) stages that trade between fun and brain-testing.

This will require some thought.

With an excellent opening tutorial and measured difficulty, there’s not a lot to find fault with here. It’s casual enough that anyone can pick up the basic elements immediately, and the bright colors and cutesy design admit as much. Don’t let that throw you off, however. You’ll face a good amount of challenge in toppling the later game’s stage physics, but never enough to discourage. It’s got that classic ‘just one more try’ approach down pat, much like the actual Angry Birds.

The end result may be more ‘inspired by’ than evolution, but there’s no denying that Produce Wars is a very fun and well-built game, worthy of the $1 price and then some. With several hours of playime, over a hundred stages, and some definite replayability, fans of slingshotting anything, be it birds or produce, will find plenty to like.