Long the theory and premise of almost every science fiction story ever told, we are definitely not alone in the universe. As our technology advances, and humanity yearns to stretch its corruptible arms across the greater heavens of interstellar space, we will finally learn the truth, for better or worse, and where we stand in the then much-larger food chain. According to Astralis ($1.00), the future of space travel is decidedly Russian (Putin doesn’t mess around), and has us meeting face to face with some very tough alien adversaries in the form of the Macropai.

As the unnamed and faceless Commissar, you’ve been sent to investigate the recent production troubles on a terraformed world far away from home, and find those responsible for the stoppage. You are essentially Judge and Jury and Space Marine all rolled into one badass package, which perhaps explains your exalted title. Unfortunately for all involved, those troubles are not of the human variety. Flying aliens have overrun the entire colony, placing nests near every major artery and complex. Most of the workers have perished, and the military (and its supplies) is scattered. Guess who’s just been promoted to de facto exterminator, comrade?

And exterminate you must. The entirety of Astralis is an open-world laundry list of cleanup objectives, mopping up one alien mess just to move on to the next. The helpful minimap and marker keep you on the path, with plenty of optional exploration to find ammo dumps, alternative weapons, and deserters to judge. Whatever route you travel, you’ll fight for every patch of ground you take. Your enemies are a smart bunch. Their resilience increases according to size (bigger guy = bigger trouble), and they come with some serious (and literal) teeth, attacking in packs and retreating to recoup health when damaged.

Almost a character all by itself, the environment on Tellaryn IV is among the most beautiful on XBLIG, with foreboding structures, gorgeous vistas, and a dynamic weather system that literally changes the color palette as you traverse, howling wind and heavy rains popping up without a moment’s notice, making an otherwise hostile alien world seem strangely all the more natural. While there’s no direct impact on the gameplay, it’s those little details in world construction that you silently appreciate.

Though it plays like almost any third-person shooter on console, the fact that it does is a testament to the controls and attention that went into the camerawork. For me, I never had to tweak the sensitivity, and I never once felt the action wasn’t perfectly framed. The shooting feels solid, and, regardless of weapon choice (shotgun, sniper, plasma rifle, etc.), incredibly effective. The challenge, too, is expertly balanced. Combat is combo-driven, with points / multipliers awarded for kills, which then translates to a save beacon you can place anywhere within the world. On Normal, you can fully enjoy the game without too much trouble, but the tentacled monstrosities really become a menace on the higher difficulties, where ammo conservation and a steady, tactical approach are vital. 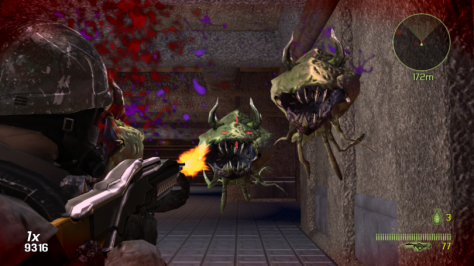 And you thought they smelled bad from far away?

Some minor quibbles. Given the world and surrounding set pieces, it’s a missed opportunity that Astralis doesn’t explain its universe a little more. Instead, it quickly ushers you from objective to objective, and any exposition given during the judgment conversations is kept largely superficial. Even the judgments themselves feel basic, with no real weight behind your decisions other than what you invent on your own. Points are handed out whether you forgive or punish. These are small nitpicks at best, mind you, and probably good news for the TL;DR set that abhors anything with a complicated plot, though I would’ve preferred more story.

Still, from the action / adventure viewpoint, the game is top notch. Easily the best third-person shooter available on the service, it’s worth so much more than the $1 it asks for. It’s like playing a really great N64 shooter during its heyday. And in a lot of ways, Astralis should be remembered as a landmark XBLIG, not just for its ideas, presentation, or its visuals, but as another title that turned the corner from simply being another independent game, or a copy of an existing property. Instead, it’s a game that shows what small teams with talent and dedication can produce, and their joy in creating and sharing that project reminds us why we pick up a controller to play them.