The Useful Dead ($1.00) is all about leading adorable critters to the exit, working around obstacles and hazards, solving the puzzle, and sacrificing your pals for the greater good when required (hence the title). There’s been some discussion as to its originality, and it’s true that other games like it exist, notably the free-to-play SeppuKuties. The closest relative in the XBLIG family tree would be Cute Things Dying Violently (the title really tells it all there), though The Useful Dead does offer direct control, placing it more in the platformer genre.

Regardless of inspiration, puzzler / platformers are ultimately judged by their ingenuity and design. Here, variety starts and ends in the way your unfortunate partners-in-treasure-seeking die, be it by impalement, fire, falling from great heights, etc. Morbid as it is (if you really stop to think about it), those bodies then become valuable currency within the level, ‘useful’ as stepping stones to higher platforms, weights for switches, or as fodder for the stampers, happily taking the no-longer-painful ‘squish’ on your behalf and allowing you to pass freely.

Though you start with a large reserve of critters at your service, it doesn’t stay that way for long. Each stage comes with a ‘par’ number of allies that can (and usually, must) be deaded during the course of finding a solution. Completion need not be flawless, with ten of the creatures listed as expendable, and opportunities to collect ‘additional lives’, if you will, by coming in under par on certain levels. Any mistakes can be reset by restarting the current stage, too, making it more about personal satisfaction than a pressing issue you need to constantly be aware of.

It can also be argued that a lot of the game’s levels are rather easy, and the goal doesn’t change; all involve the death of a few cute creatures. In most, the solution is either immediately noticeable or soon apparent, and experimentation will get you the rest of the way to that ‘a-ha moment’. They’re not all pushovers, mind you. A handful of stages will require some thought, but The Useful Dead is definitely not as taxing to the brain as it could have been, more about timing and placement than prolonged head-scratching. You’ll either enjoy that change of pace or wish for something sterner. I appreciated the balance. 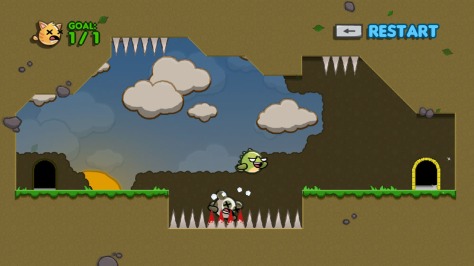 The only ‘good’ friend is a dead friend.

Whatever camp you fall into, The Useful Dead is an enjoyable experience. Its tricks may be telling to some at the outset, though there’s enough clever design in the puzzles to keep others on their toes. Much like in the previously-mentioned titles, you’ll gladly kill off plenty of cute things with a smile on your face.

15 thoughts on “REVIEW: The Useful Dead”